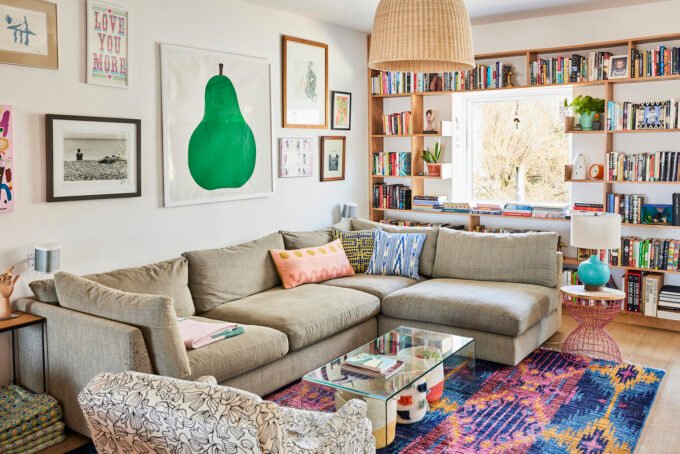 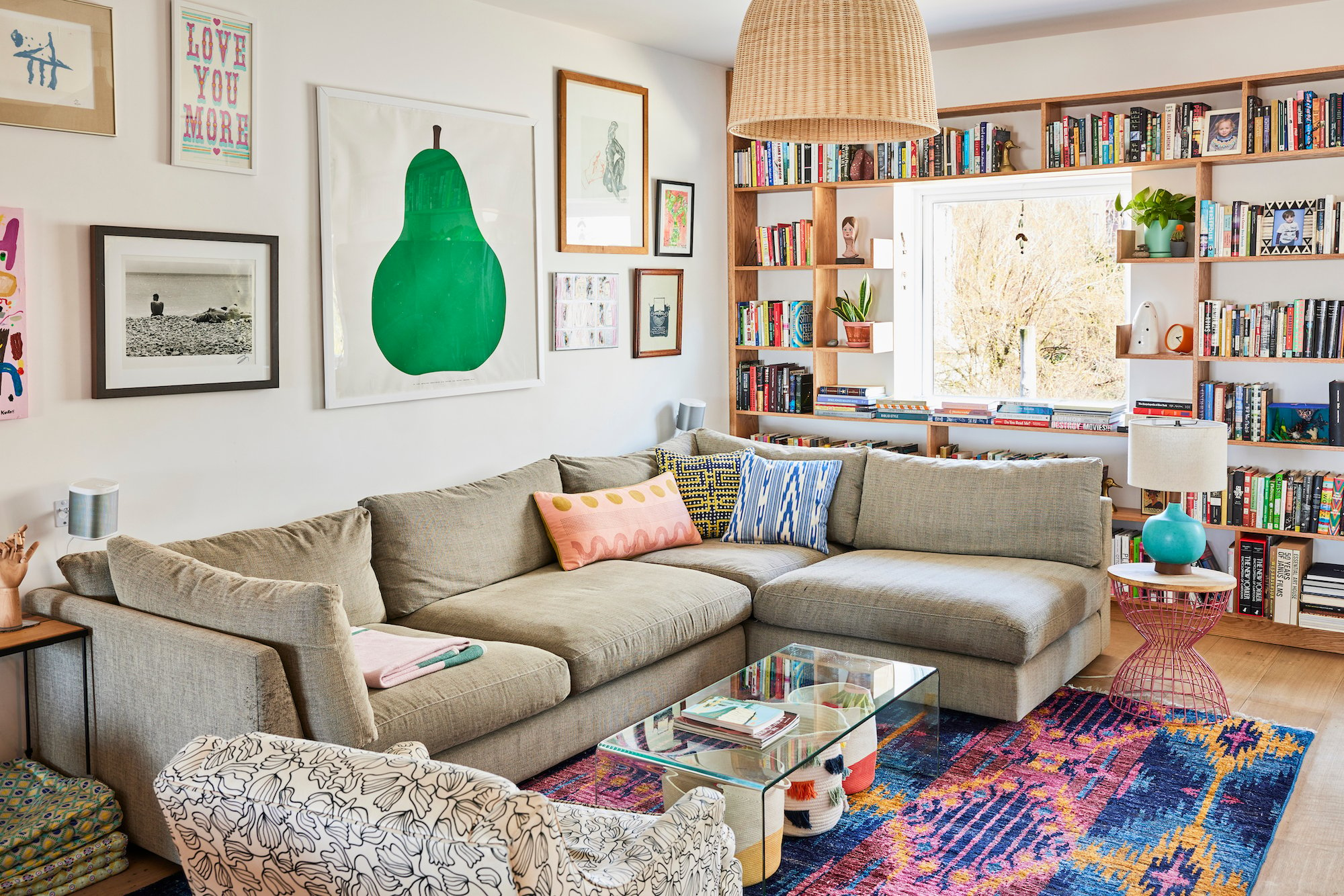 “I’ve always been a colorful person,” says author and bookstore co-owner Emma Straub, whose newest novel, This Time Tomorrow, comes out today. “I recently met a friend for lunch, and she said, ‘You look like a crayon box!’ That’s what our house looks like, too.” She shares her book-filled Brooklyn home with her husband, Mike, and two sons. Here’s a peek inside… 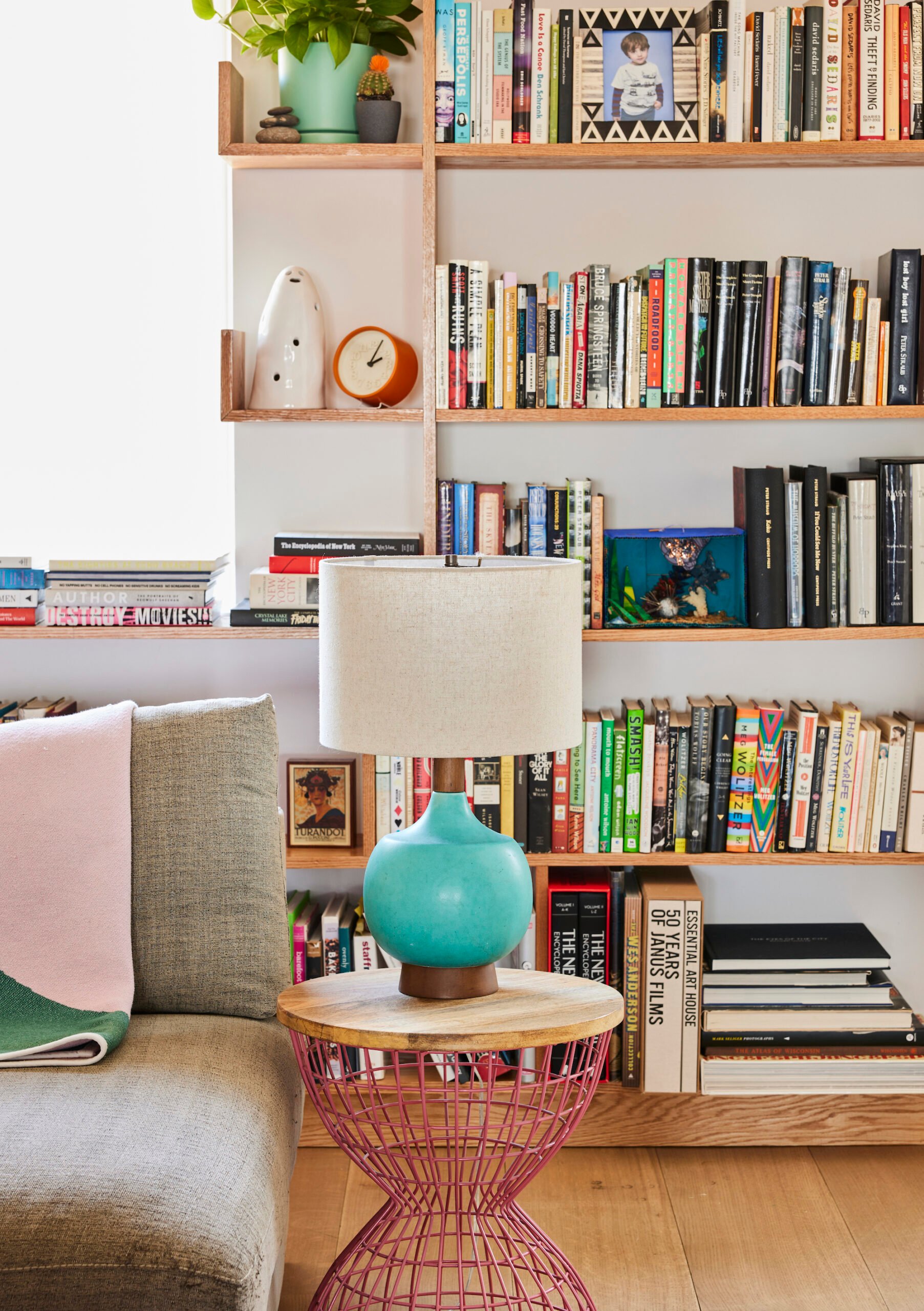 On living with books: We recently built these bookshelves because things were getting out of hand. Just piles and piles everywhere. When we moved in seven years ago, Edward Orloff built shelves in the dining room, and then we hired our bookstore construction crew to build these in the living room. Our design is about as meticulously thought out as our art hanging, which is to say we drew it on a napkin.

On cozy sectionals: We are loungers. This particular sofa is so deep that when I sit on a couch that’s a normal size, I’m like, where’s the rest of it? But I love it, it’s so comfortable. It has also been used as a trampoline for several years now.

On evening hangs: It’s deeply uncool but my husband and I are morning people and we are utterly useless at night. We just watched Severance which was very good and very scary. We also watch Top Chef with neighborhood gal pal Gail Simmons, and we’re still watching Survivor! 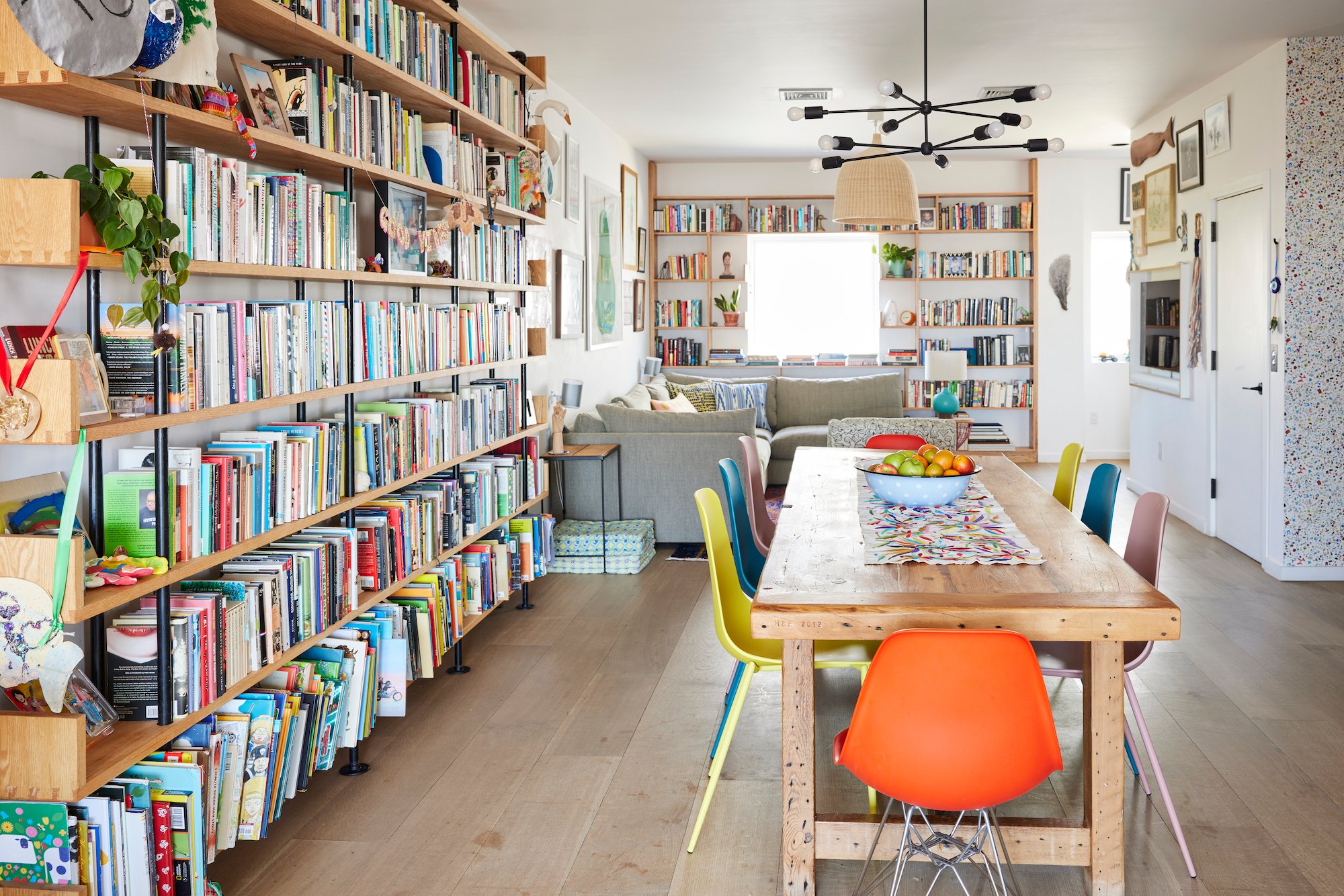 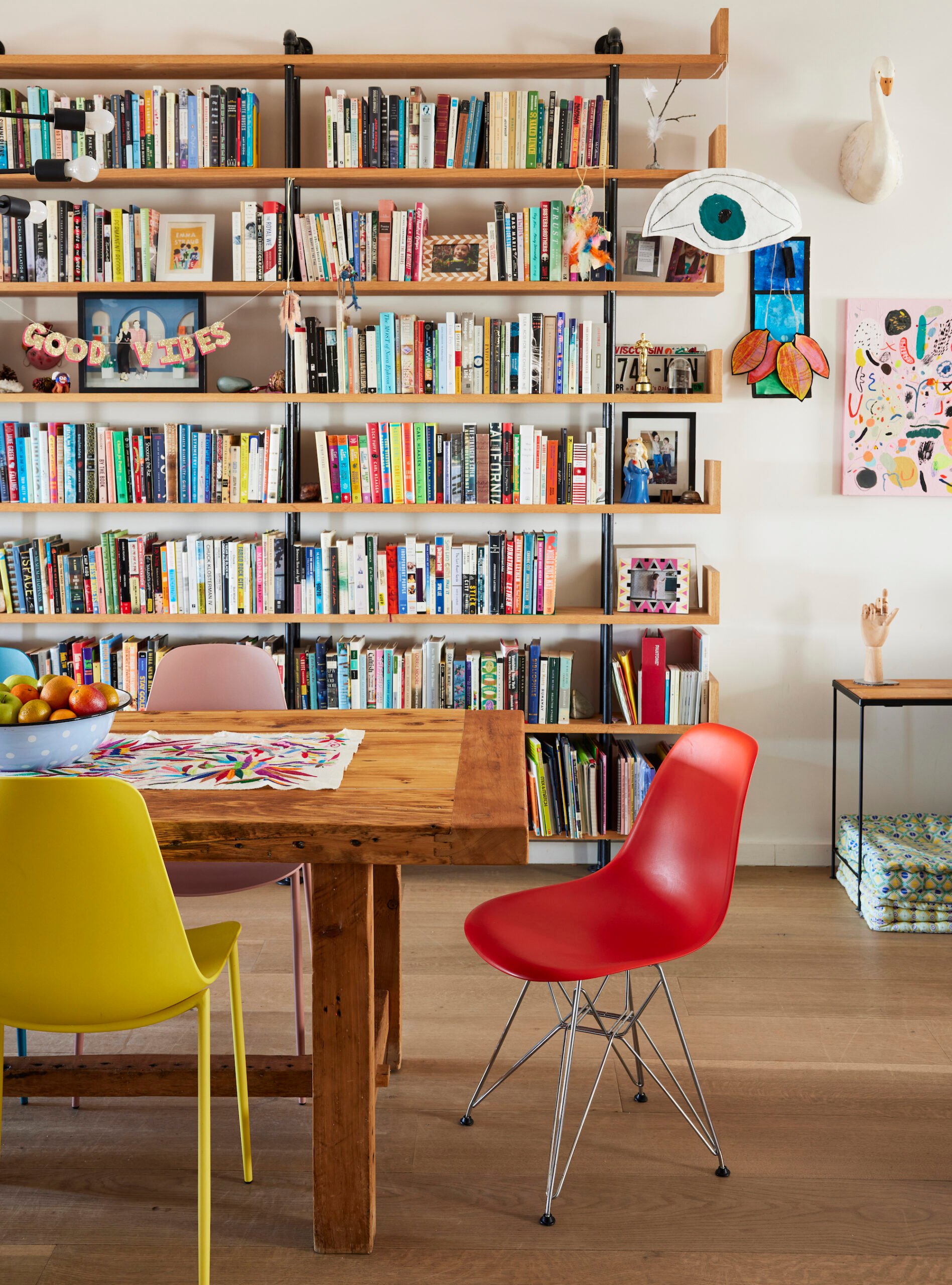 On sparking joy: Mike and I have been together for almost 20 years. I am a hoarder from a family of hoarders. He’s a minimalist from a family of minimalists. It has been really funny to watch our house evolve — or devolve, depending on your point of view. My decorating philosophy, is, don’t think too hard and just do what makes you feel good. If we come across something that sparks joy, it joins the parade. If one of my children creates something beautiful, I hang it up immediately. A ‘happy birthday’ sign was up for a year, and eventually Mike was like, we HAVE to take this down. But I feel like it’s always somebody’s birthday. 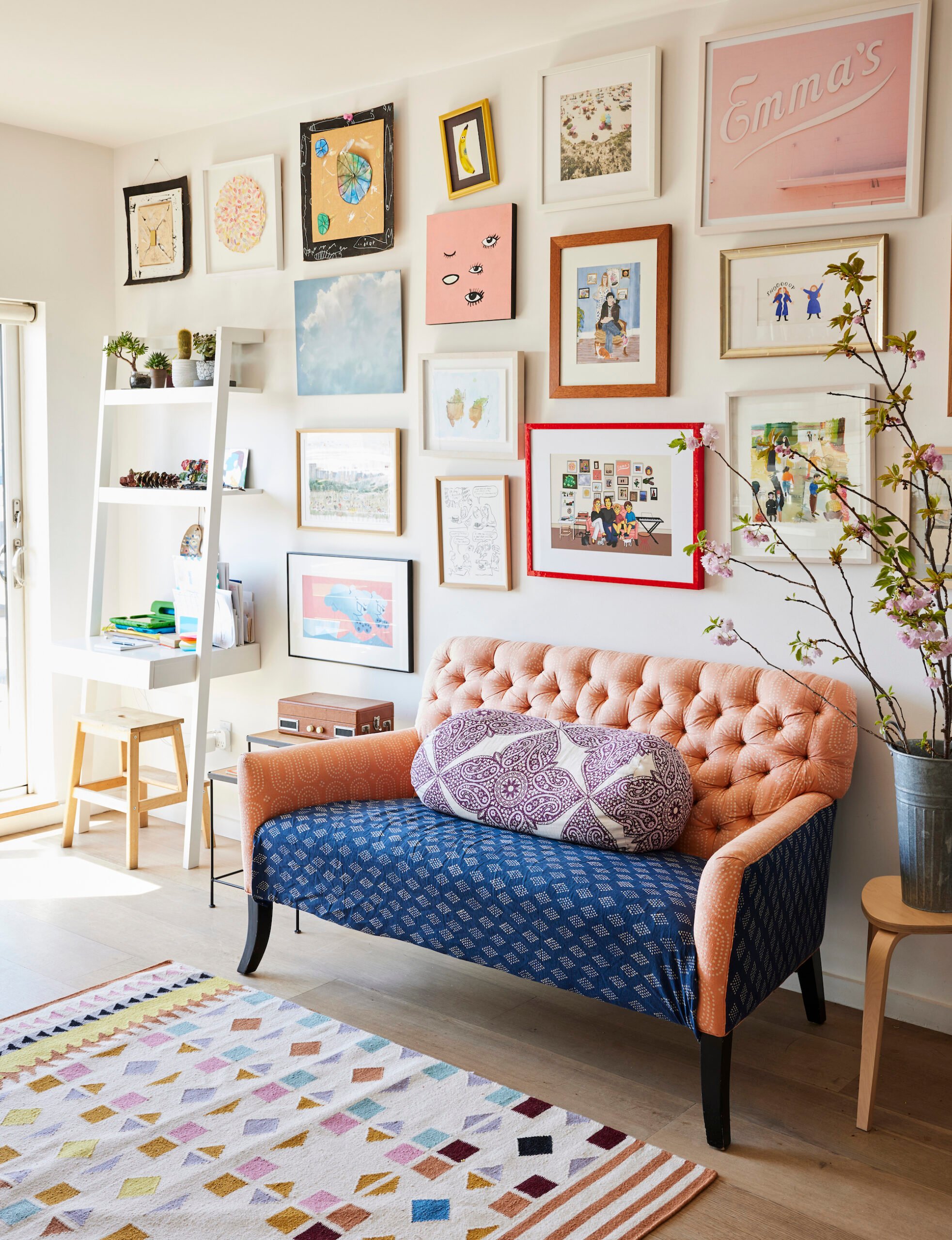 On family art: Gabby, our children’s babysitter and the love of my life, gave us the Simpson artwork for my birthday. You can do it on Etsy and other sites. I mean, Matt Groening is not doing it. I’ve also been collecting original art from some of my favorite picture book artists. On this wall, there are two pictures by Carson Ellis, who is my favorite favorite illustrator — one from her book Du Iz Tak? and one from her book In The Half Room. 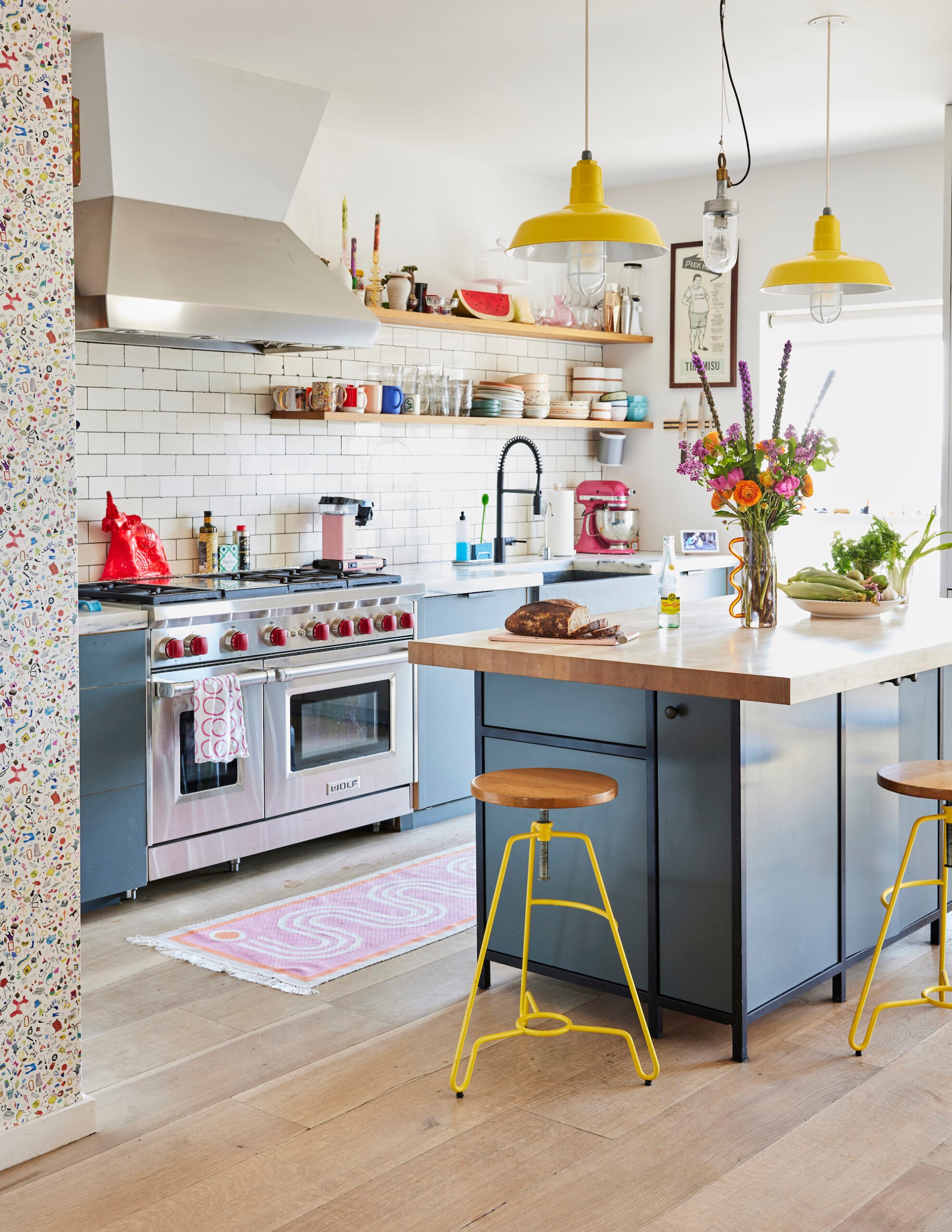 On go-to family meals: Our #1 most cooked dish is this sheet pan red onion tomato feta broccoli situation from the New York Times Cooking app. That is always what we cook when we’re 100% brain dead and can’t possibly think about it. 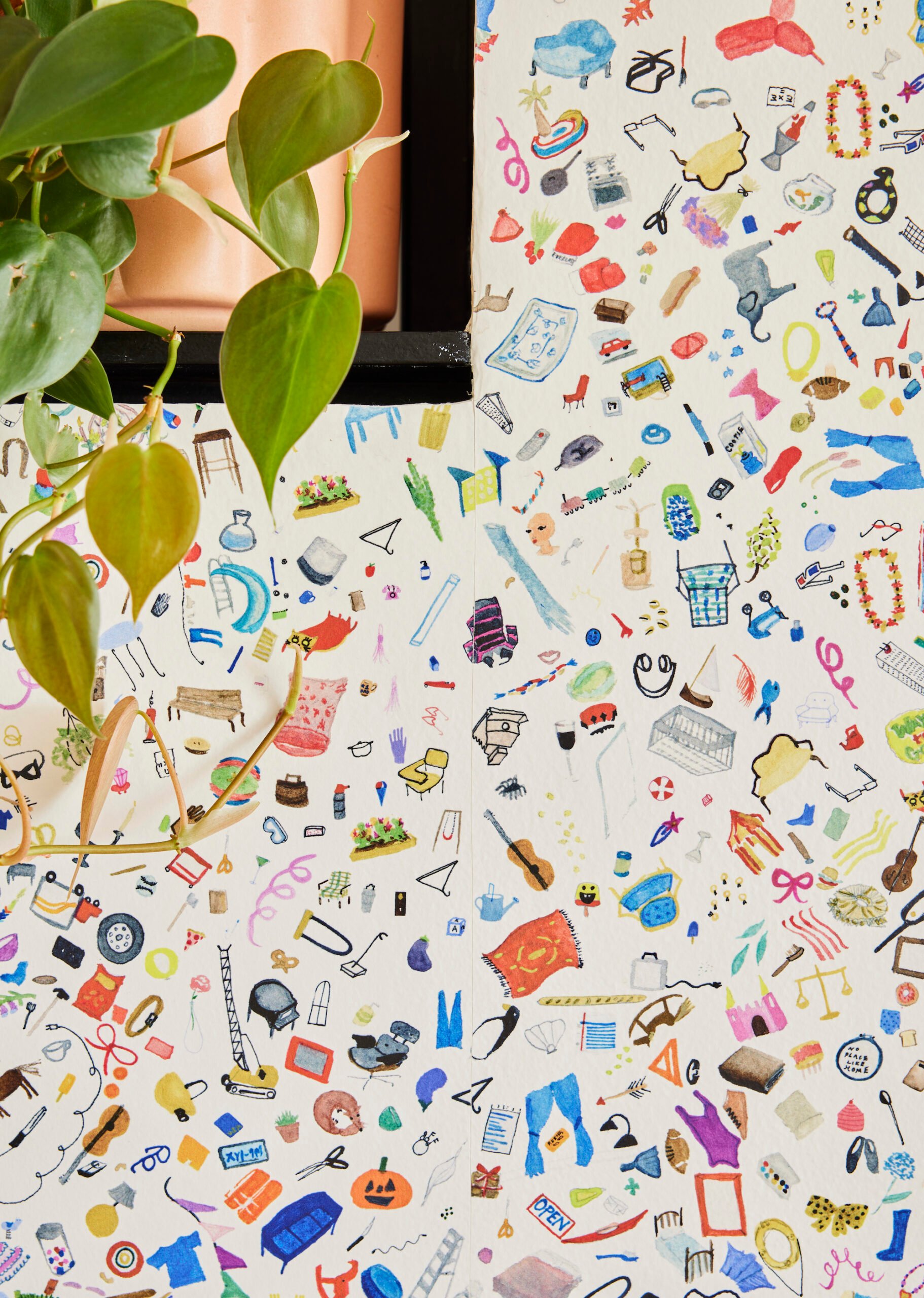 On Too Much Stuff wallpaper: The kids love it. I love it sooooooo so much. I love it so much. It’s hours of entertainment. You can play so many games. ‘Find the red car, you’ve got 30 seconds.’ 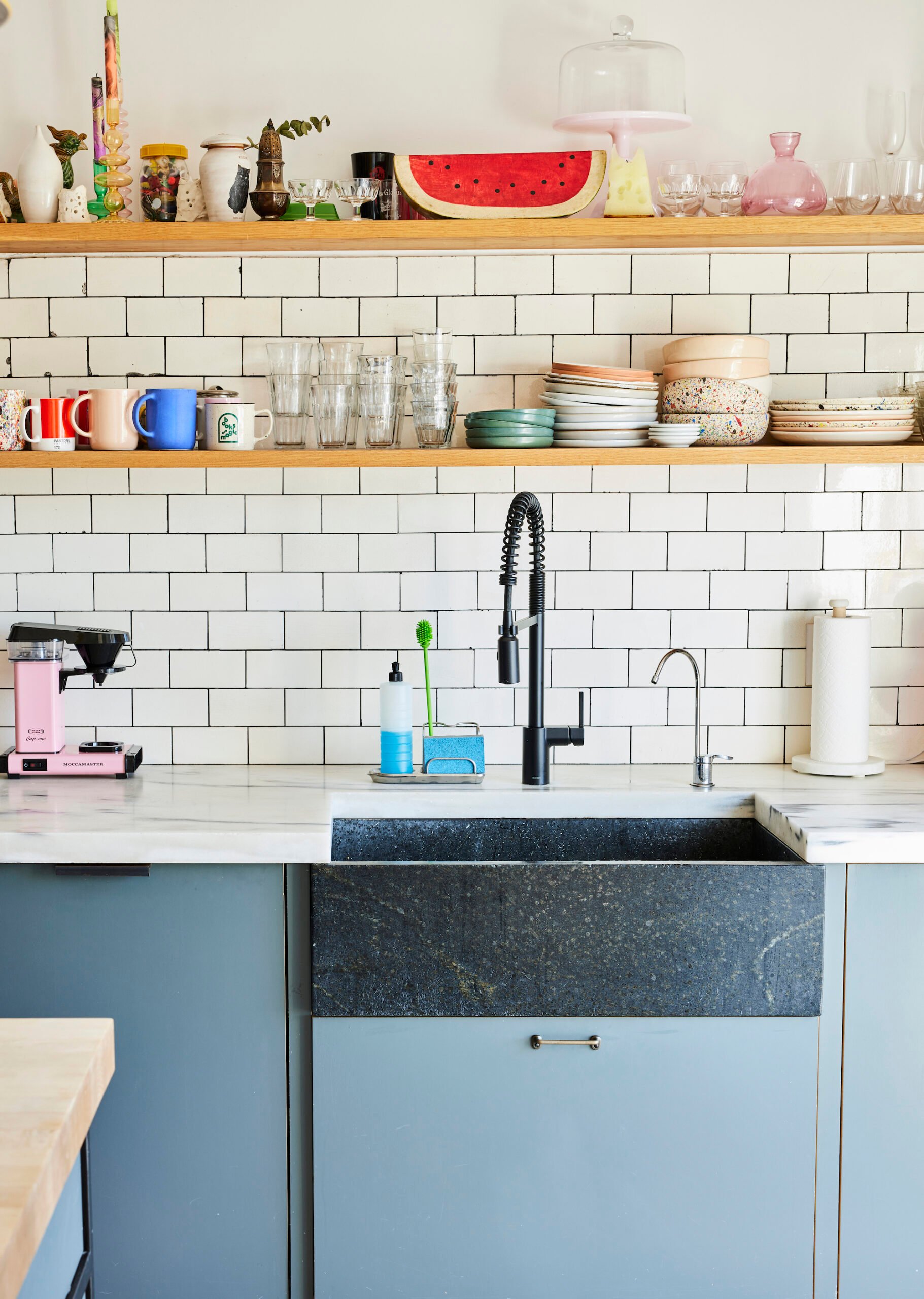 On a buzzy new book: This Time Tomorrow is my autobiographic time travel novel. This book is what kept me sane during 2020. I couldn’t write from March to October because I was trying to keep my children from killing each other. But once I had childcare again, this is what came out. I know it’s a joke to say it’s an autobiographic time travel novel, but it’s also literally the truth. It’s fiction, but it is also very much just a story about me and my dad on the Upper West Side in the ’90s. It was the most pleasurable writing experience of my life.

On writing about family: My dad went into the hospital from August 2020 until Thanksgiving. He was so, so sick. And I was able to visit him once a week, and we would talk about anything and everything — writing, books, our families, ourselves — and it was wonderful. That is where this book came from: I needed a place to process my feelings, and this was the best way I knew how. I thought he was going to die. And it feels wonderfully hilarious and beautiful that he can see my book and all of this. We were talking the other day about the Curb Your Enthusiasm episode where Albert Brooks stages his own funeral, and my Dad said, ‘That’s a good idea, I want to do that!’ And I was like, ‘Dad, I just wrote a whole book about you.’ And he said, ‘Yes, but what would the poets say?’ 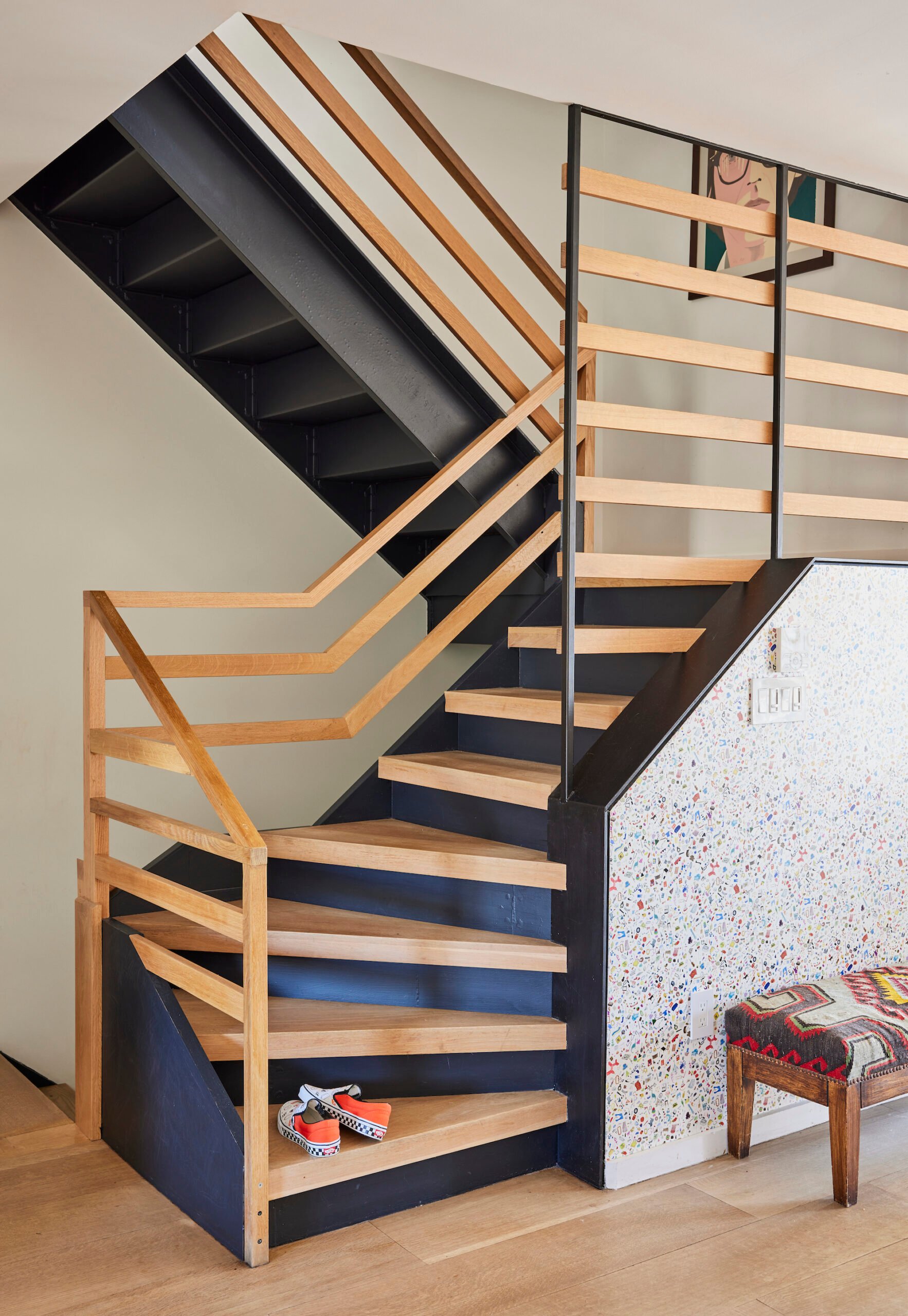 On living with uncertainty: If I’ve learned anything from the last few years, is that you just don’t know what’s going to happen. I am a Taurus, so I like things to be steady. And one of the things that I’m still learning to get used to is unsteadiness. If you went back 10 years and told me that Mike and I would own a bookstore, I would be like, ‘Really?! Why??’ [laughs] But I also find that comforting, the idea that, yeah, I’m 42, but it still is possible to evolve and grow and have things not always stay the same. It’s both terrifying and reassuring at the same time. 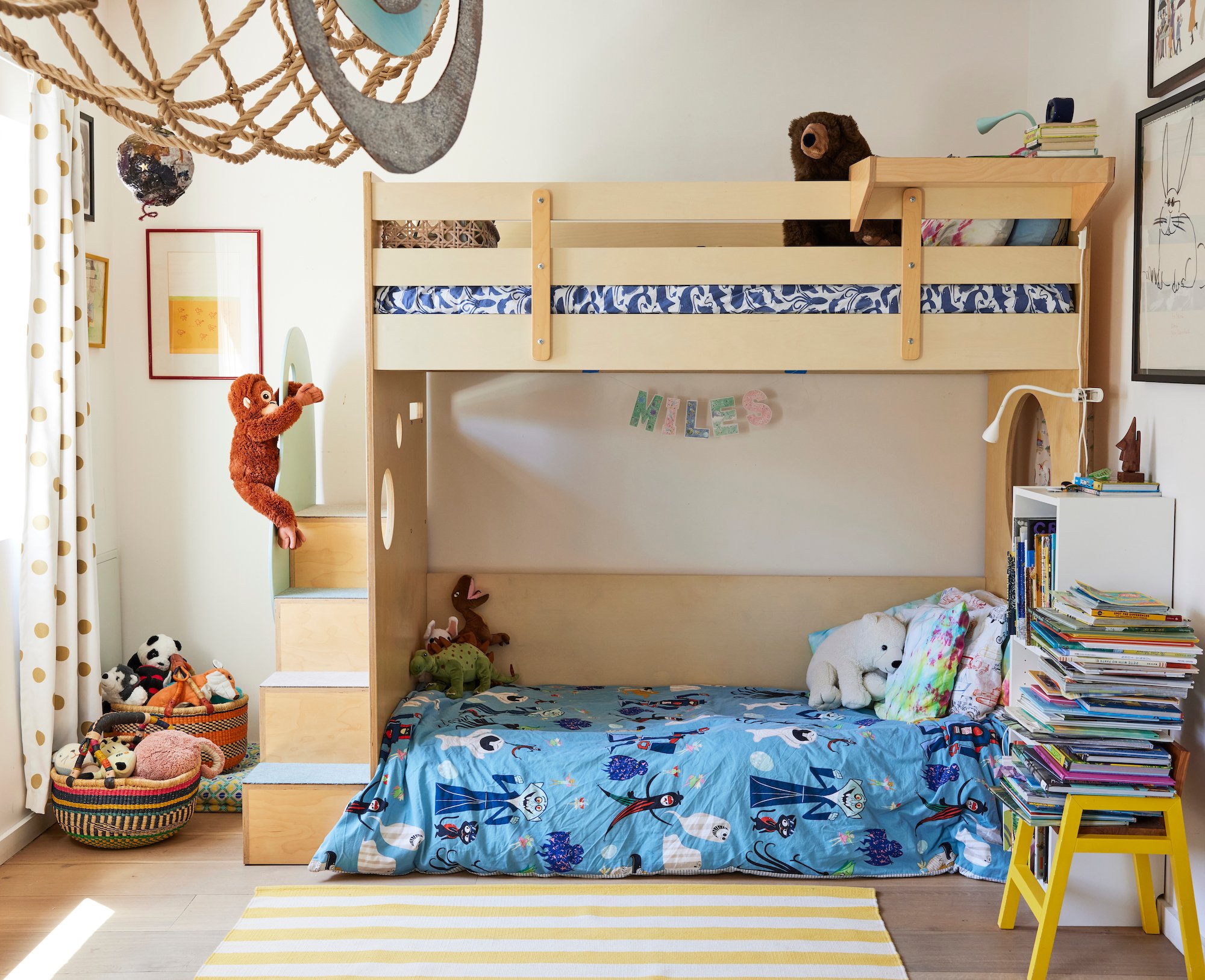 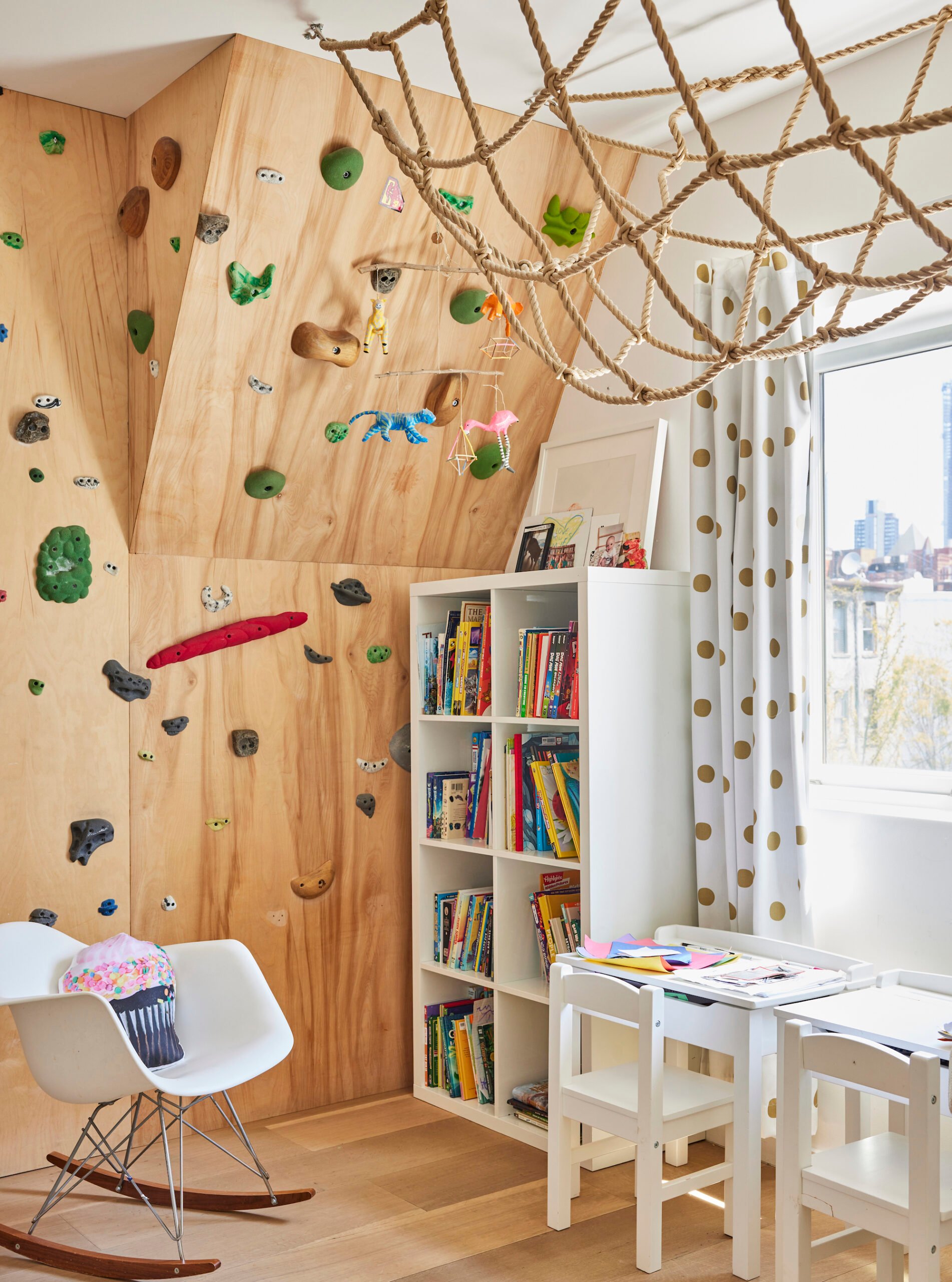 On a playful vibe: The climbing wall and net were here when we moved in. It would be such a dream room for some really sporty, climb-y children. And I don’t have those children. We look at it as an art installation.

On late-night conversations: Miles usually falls asleep in like three seconds. But River often sneaks downstairs to have a talk with us about something. He always comes with a topic because he knows we’ll be like, ‘What are you doing? Why are you coming down?’ So, he’ll be like, ‘I was just thinking about…’

On beloved stuffies: River’s favorite stuffed animals are OUR childhood stuffed animals. And Miles is very devoted to his. He told me the other day that he was writing a story about his stuffed animals but he wanted to throw his class off the scent so they didn’t know they were his so he said they were River’s. I said, I promise you, every single kid has stuffies. But he didn’t believe me. 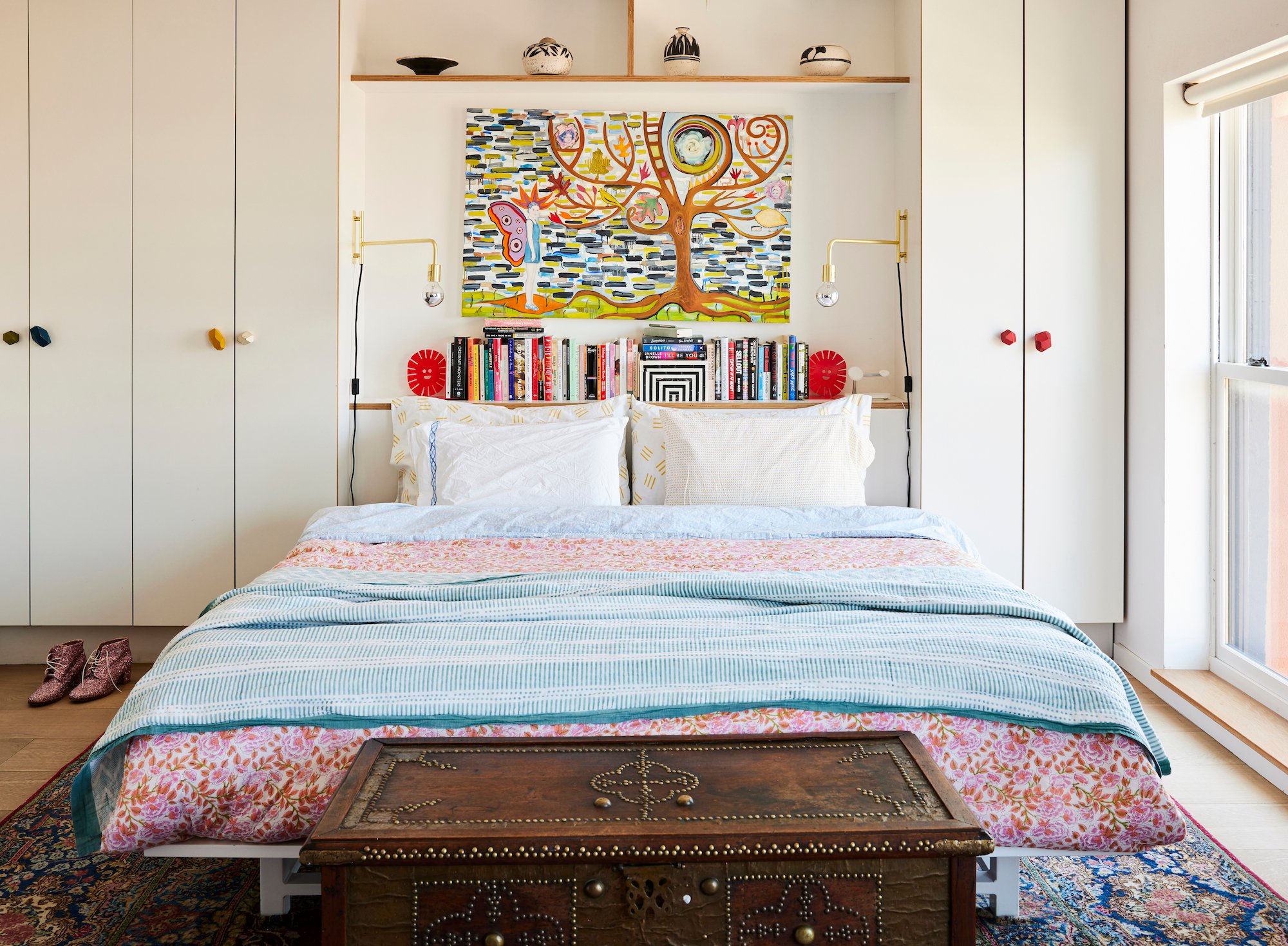 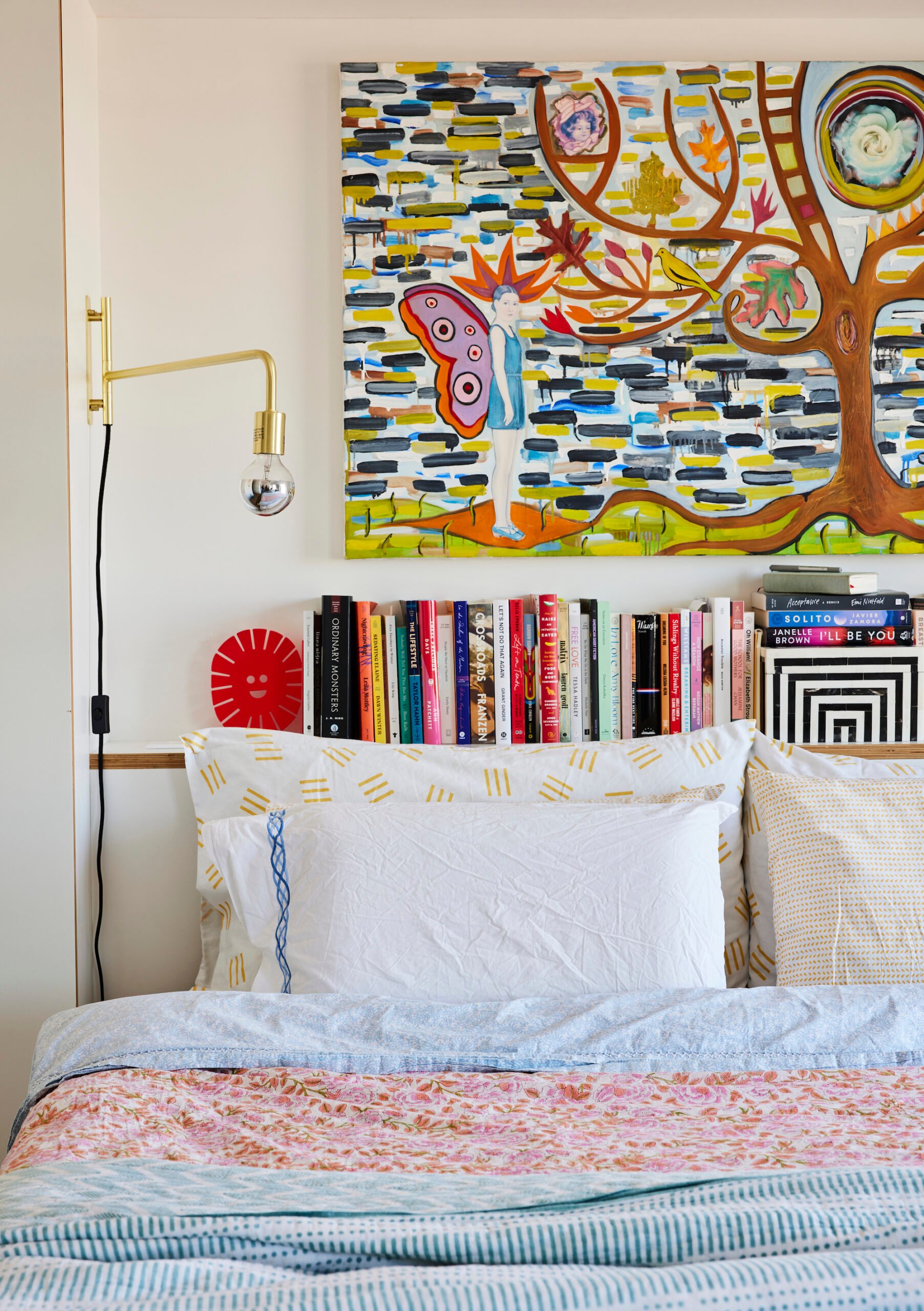 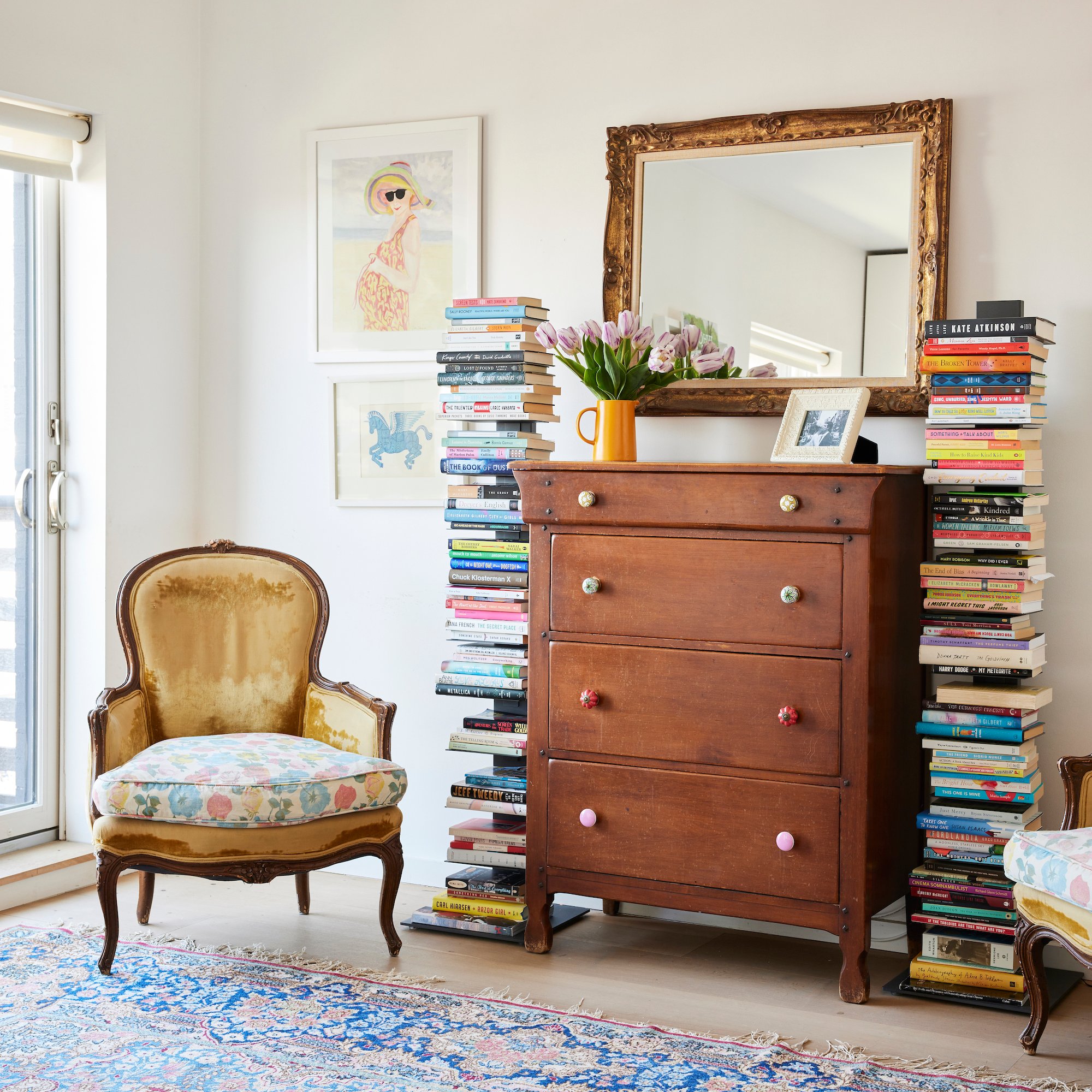 On raising readers: River taught himself how to read when he was four. It was like a scene in a weird movie where the child just opens a book and starts reading it. But while Miles has always loved books, he’s just starting to learn to read at six. We read with them every day, and our house is filled with books, and obviously we talk about writers and illustrators all the time. I have total faith that as long as they, as kids, see how wonderful books are that they will make their way to being readers in their time. I think that the danger comes from when kids feel discouraged. With Miles, we’ve been practicing at home, and the other day, I gave him one of his old board books, and it was so much fun. It doesn’t matter how many words are on the page, the point is to enjoy it. 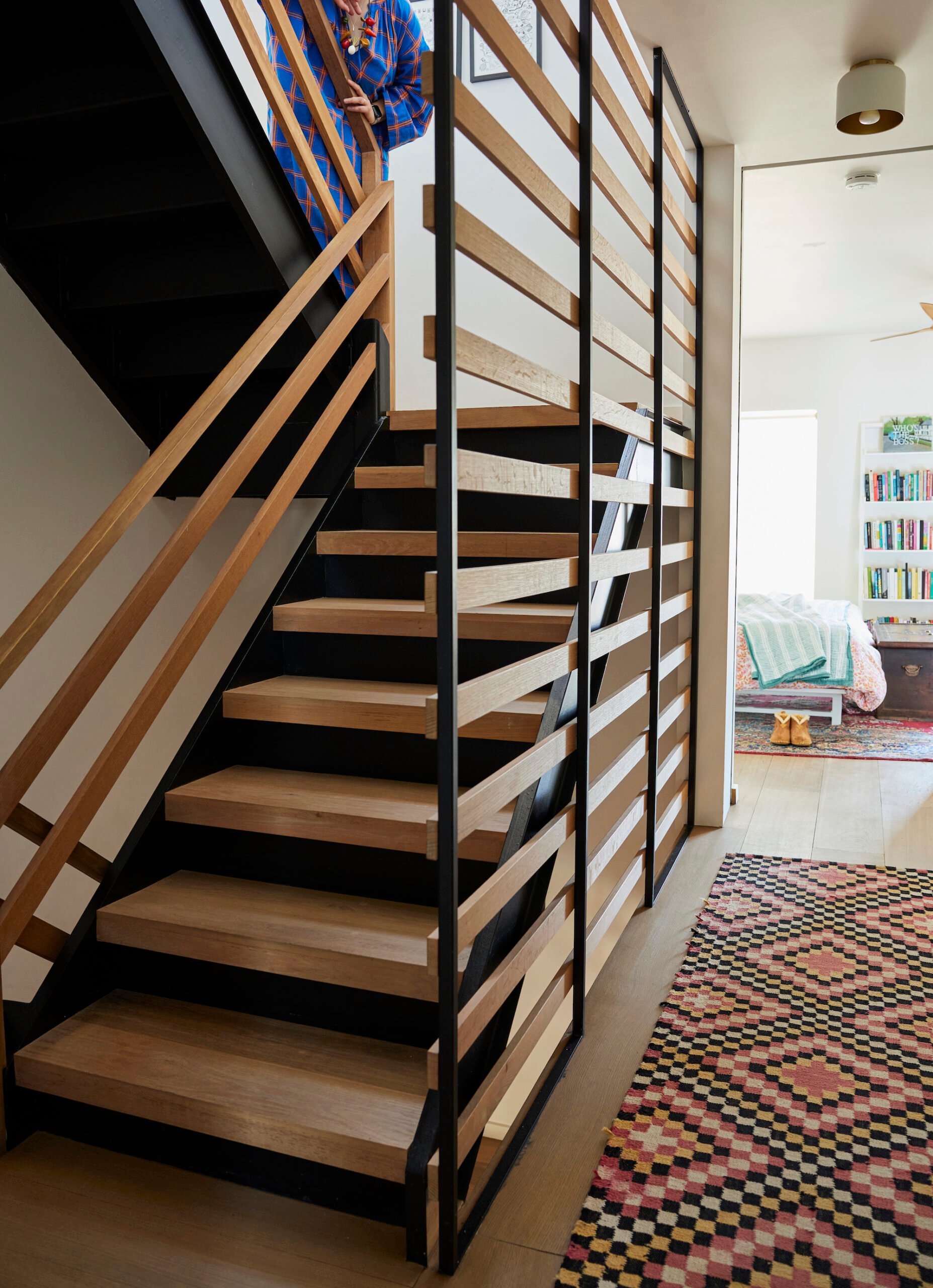 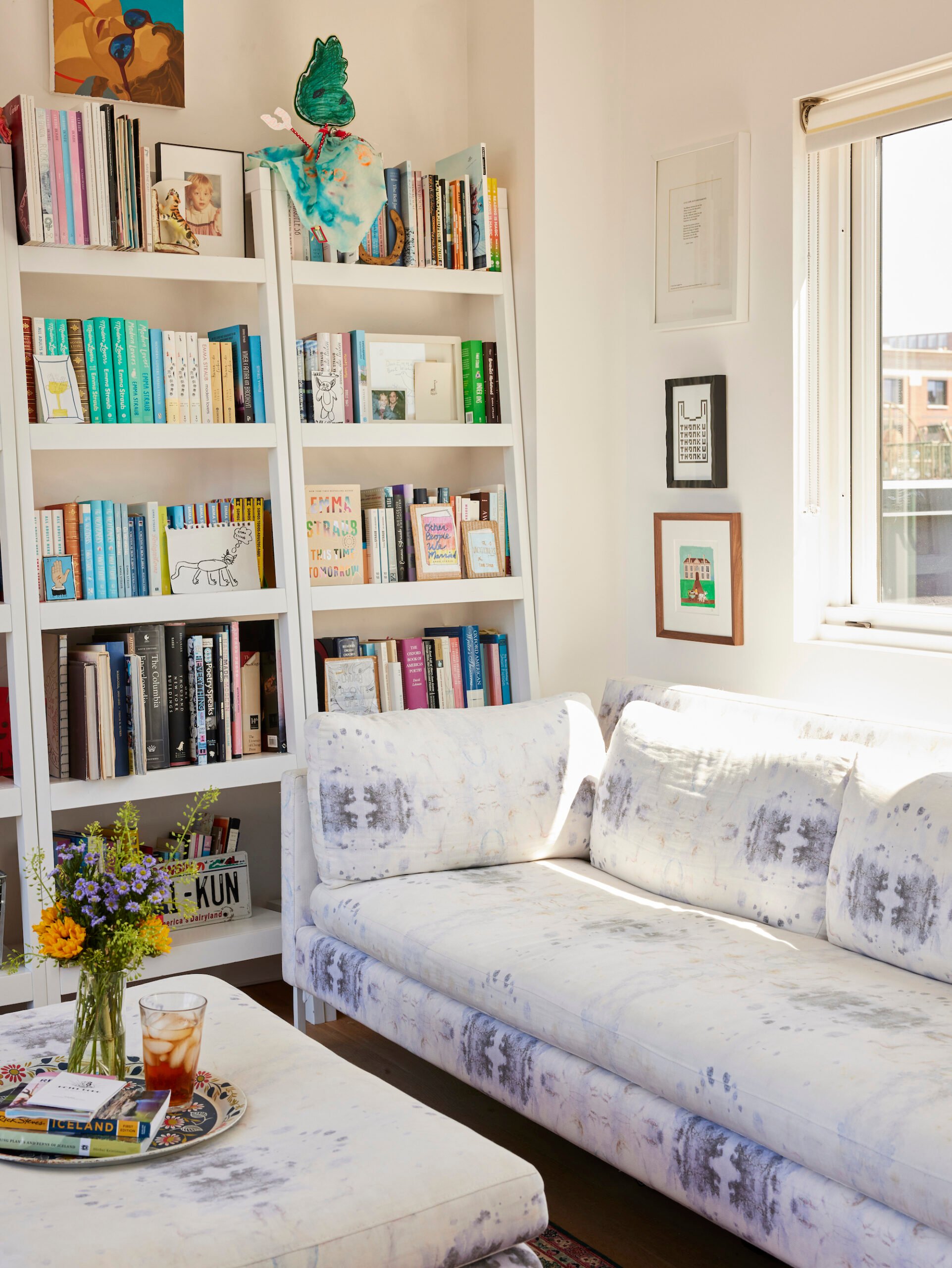 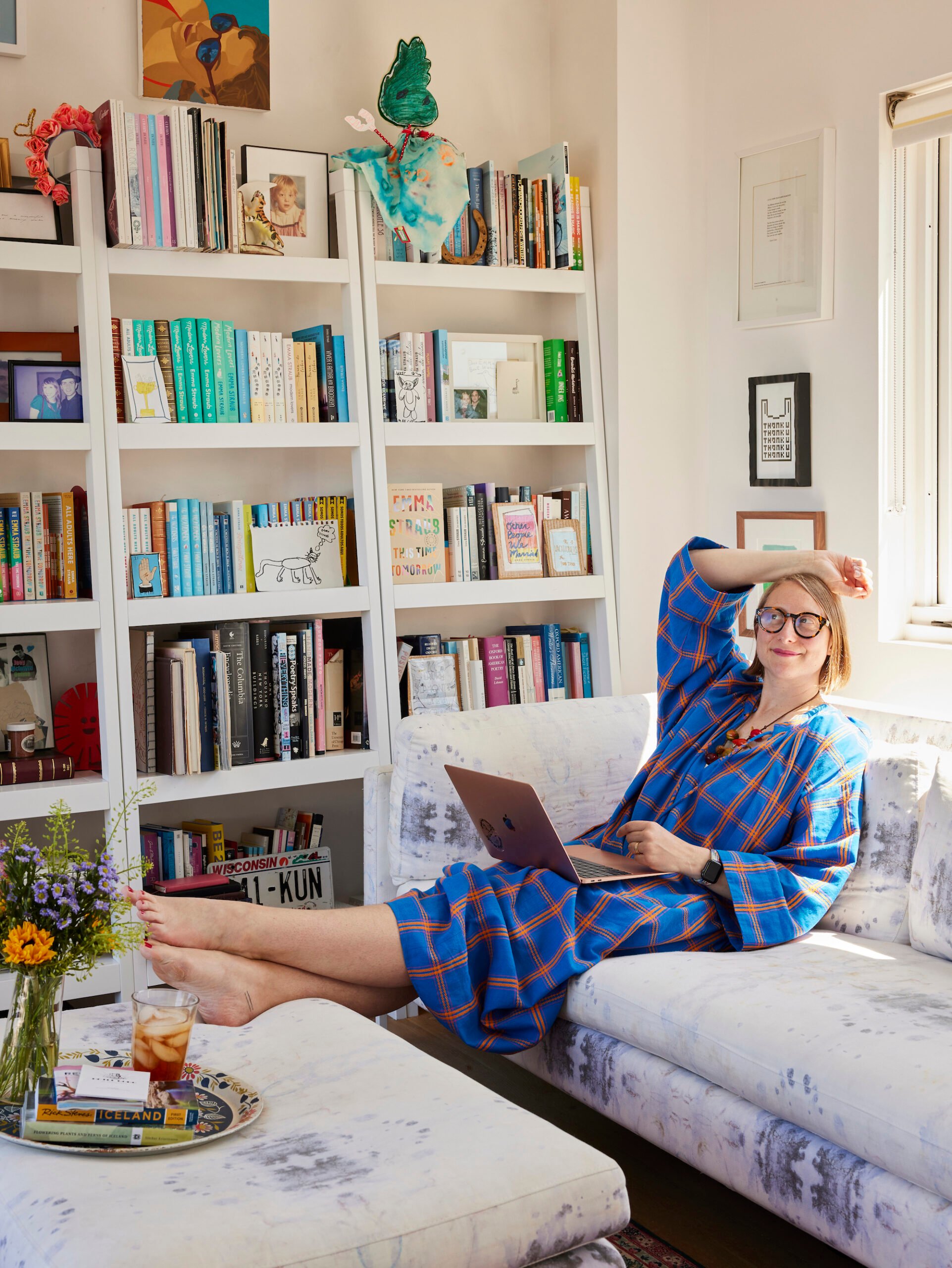 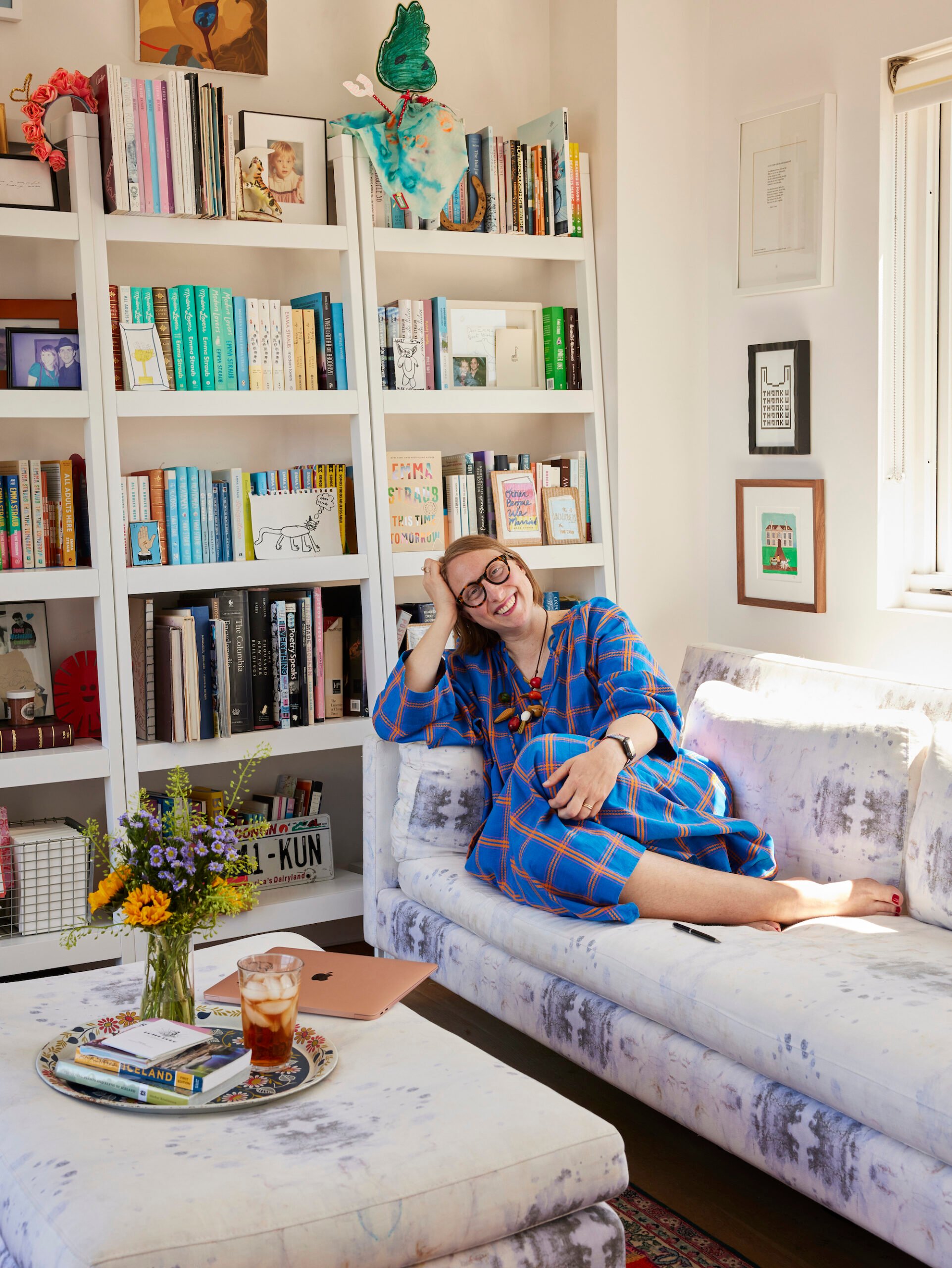 On a room of one’s own: My office is really bright and quiet, and my cats keep me company. I have all my books here and all my ridiculous stationery, and I just sit up here working, reclining on the sofa with my computer in my lap. It makes me so happy.

On writing rituals: I used to have a more specific schedule, but now I think, oh, I can write for three hours on Tuesday, so I’ll write for three hours on Tuesday. I work better in the morning, but at this point, I’m constantly toggling between writing and bookstore stuff, so whenever I can have a chunk of time, I use it. I’ve never been particularly precious about writing. Any time, I will take it.

On a lightning round:

Summer beach read: My #1 book to recommend that comes out this summer is Tomorrow and Tomorrow and Tomorrow by Gabrielle Zevin. It’s incredible, like The Amazing Adventures of Kavalier and Clay by Michael Chabon meets The Interestings by Meg Wolitzer. It’s about love and friendship and video games.

Book that has been meaningful in your life: Frank O’Hara’s Lunch Poems is one of my all-time favorite books in any genre. It set me on fire as a teenager and I love how he saw New York. And they’re funny.

Book with a steamy sex scene: I love Emily Henry, of course. In her new one — Book Lovers — there is some sex in a grotto that was quite good.

Mystery that kept you on your toes: My mom is an obsessive Louise Penny fan. I really liked Magpie Murders by Anthony Horowitz, and another good mystery is Who Is Maud Dixon? by Alexandra Andrews.

Book that made you laugh: Cult Classic by Sloane Crosley comes out in June. She’s of course best known for her essays, and this is her second novel and it’s really genuinely hilarious laugh-out-loud funny.

Book that kept you up all night: I didn’t want to stop reading The Dead Romantics by Ashley Poston. It’s a rom-com, only one of them is a ghost!

Thank you so much, Emma, and huge congratulations on This Time Tomorrow.

P.S. More house tours, including a rainbow bookcase and a Minnesota home with the cutest dog. Also, Emma and Mike’s wedding on Cup of Jo in 2008!

(Photos by Alpha Smoot, styling by Oliver Cano for Cup of Jo.)