14 Surprising Things About Parenting in India 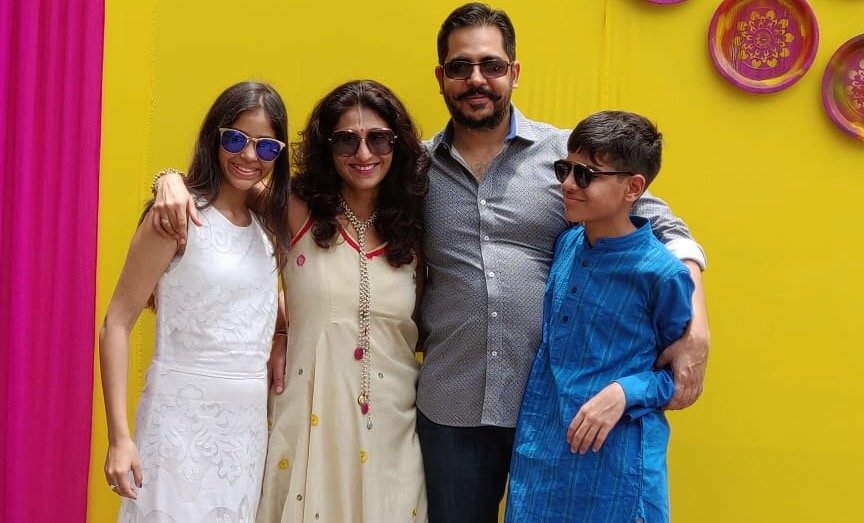 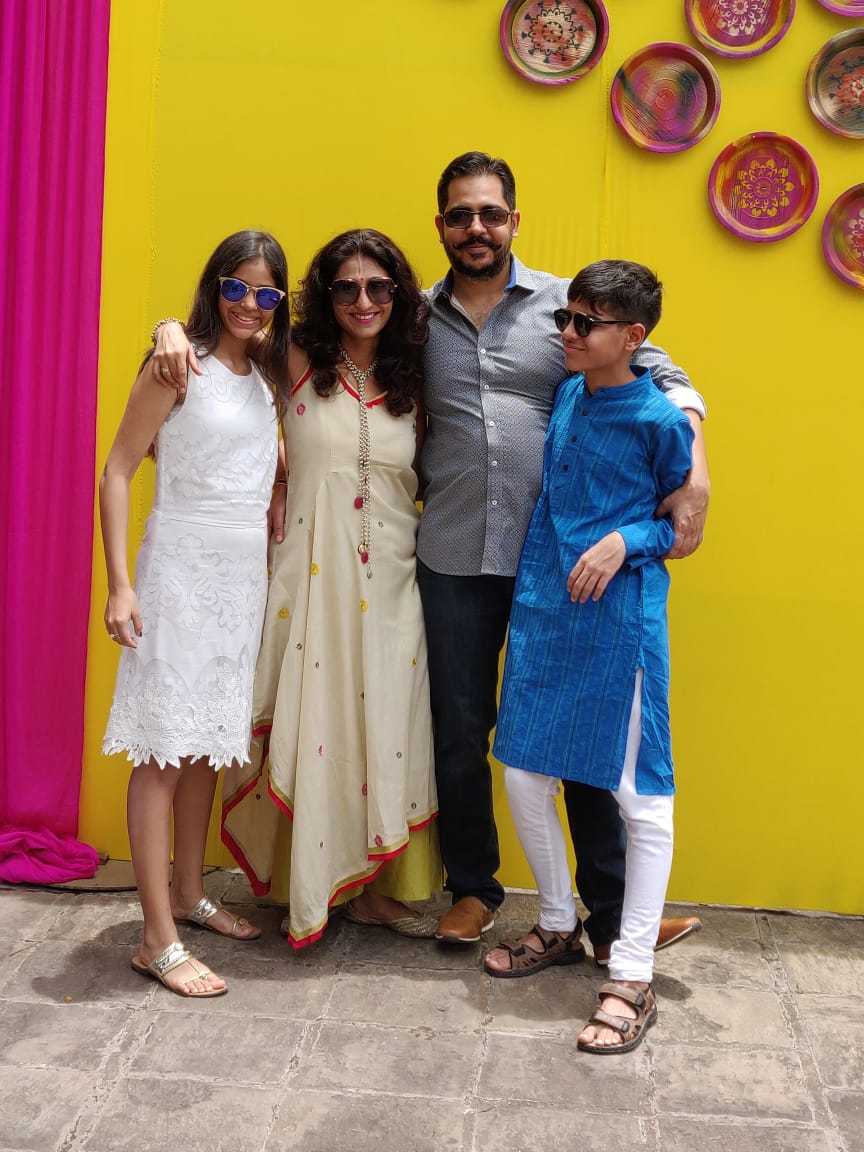 For our next Parenthood Around the World interview, we spoke to Gopika Kapoor, a writer and neurodiversity consultant, who lives in Mumbai with her husband and twin children. Here, she describes arranged marriages, a deep reverence for grandparents, and raising a child with autism in India… 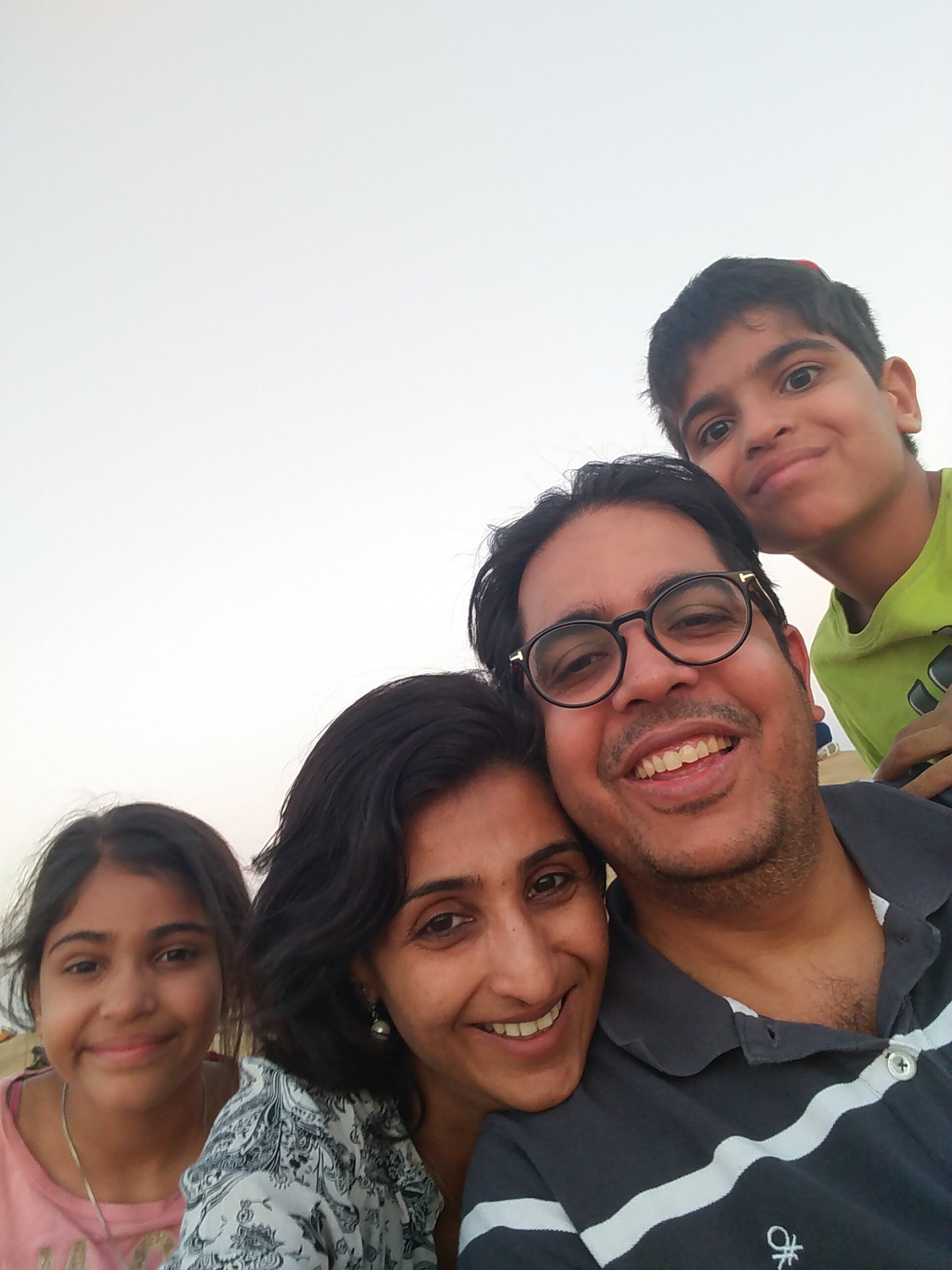 Gopika’s background: Born and raised in Mumbai, Gopika now lives with her lawyer husband, Mohit, with whom she’s raising twins, Vir and Gayatri. “I’ve lived in Mumbai my entire life, except for two years doing my journalism masters in Boston,” she says. “I moved back because this crazy, over-crowded, chaotic city is home.”

But when her son was diagnosed with autism at age three, Gopika struggled to navigate the school system, face a crushing social stigma, and find resources and books on autism written in the context of a developing country. After learning all she could while fighting for her son, she became an autism therapist and is now one of India’s leading disability advocates. Her recent book, Beyond the Blue, shares her beautifully honest story of raising a child with autism in India.

Nowadays, Gopika’s kids are 17 and thriving. Gayatri is an old soul, who likes writing poems, playing her ukulele, and cuddling the family bulldog. Vir is a visual thinker. He puts together 1000-piece puzzles and built his own radio and battery-operated car. “Gayatri means ‘warmth, sunshine, wisdom,’ and Vir means ‘brave,’” explains Gopika. “Both kids live up to their names.” 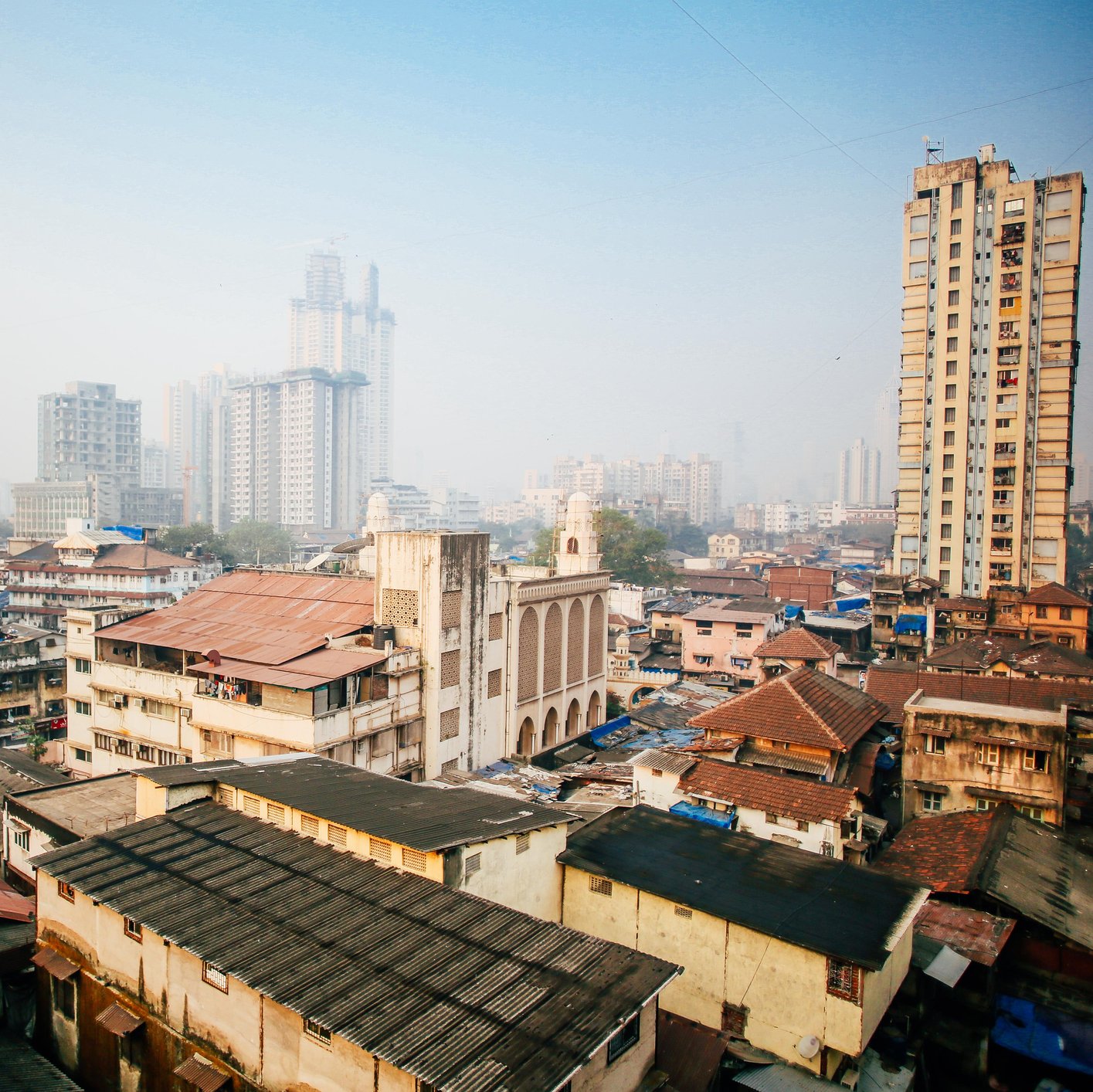 The slums and high-rises in Mumbai

On an upscale apartment: We live in a three-bedroom apartment within a gated community. In India, there is a huge divide between rich and poor. Instead of saying ‘I live in Mumbai,’ I often say, I live in ‘my Mumbai,’ since I don’t live the same life as somebody who lives in a slum or somebody who lives in a chawl (multi-family tenement houses, where a family shares one room). People in different parts of the country live in completely different ways — with their own cuisines, languages, clothes and cultures.

On representative movies and books: The movie The White Tiger feels very real to me, as does All the Beautiful Forevers by Katherine Boo. And in the book Chup (which means quiet or shush), social scientist Deepa Narayan-Parker examines how women — even successful bankers, engineers, doctors, lawyers — have been taught to stay silent within their families and communities and not stand up for what they believe in. There’s also a funny novel called Polite Society by Mahesh Rao, which is a modern-day Emma set in high society Delhi. 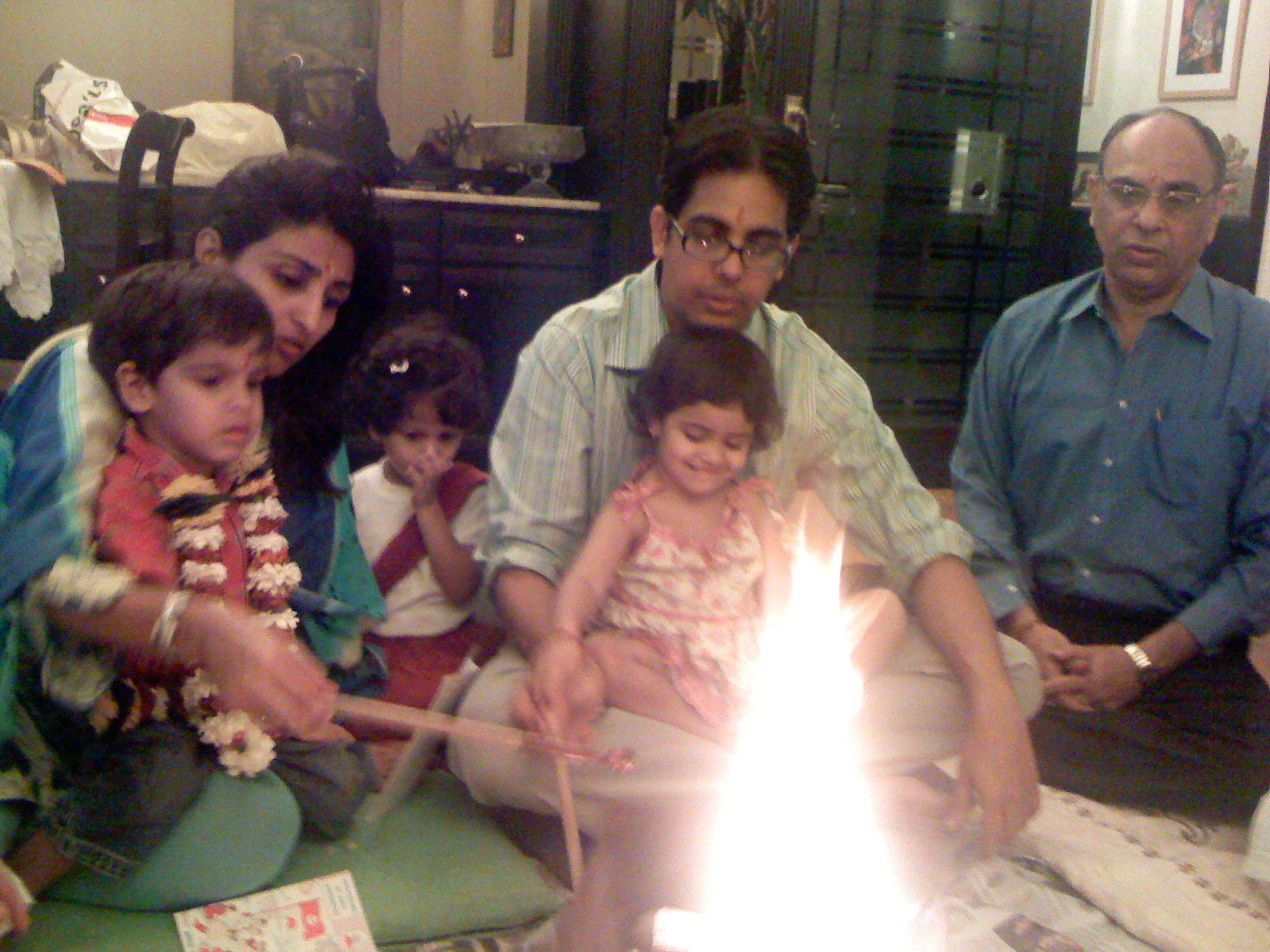 On a favorite ritual: Our family likes board games and movies, but something we do that is particularly ‘Indian’ is a havan. You give offerings into a fire — like grains, ghee, and other Ayurvedic herbs. It’s a way to solemnize births, weddings and deaths, but it’s also how we celebrate birthdays and anniversaries and just cleanse the atmosphere of the house. When our kids were little, they’d sit in our laps, but nowadays they recite the mantras and put in the offerings. We do a havan every couple months, as it makes us all feel good. 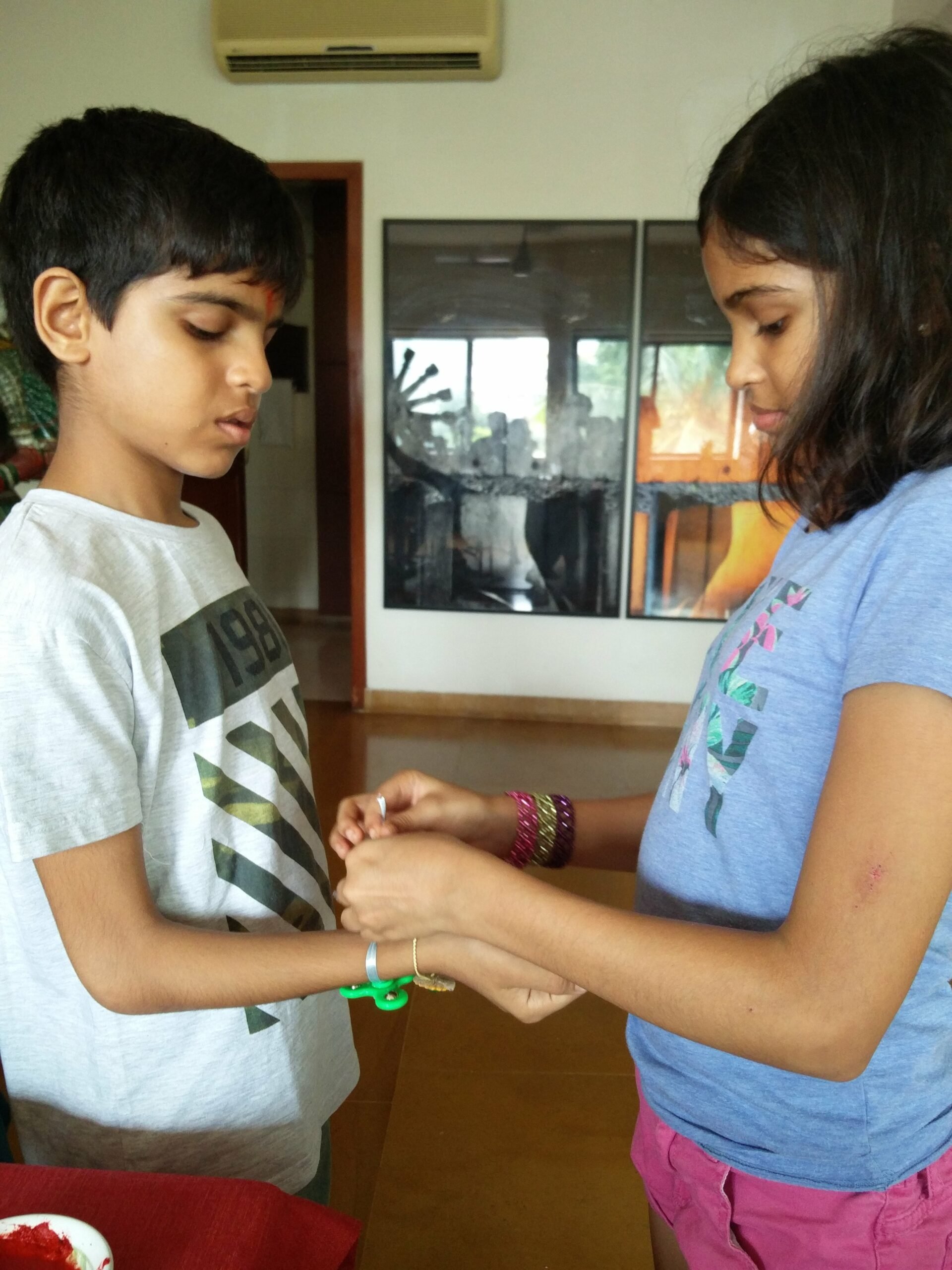 On creative problem solving: What I love most about life in India is a term called ‘jugaad,’ which means solving problems using whatever resources you have at your disposal. Having limited resources, like we do in India, makes you creative and resilient; you keep looking for solutions until you find one that fits. For example, when we had a leaky pipe, Vir attached a bottle to catch the water droplets until the plumber arrived. And when kids with disabilities felt isolated during lockdown, a friend and I created a Facebook group for them. Jugaad is so ingrained in us that it was hard for me to even think of examples! 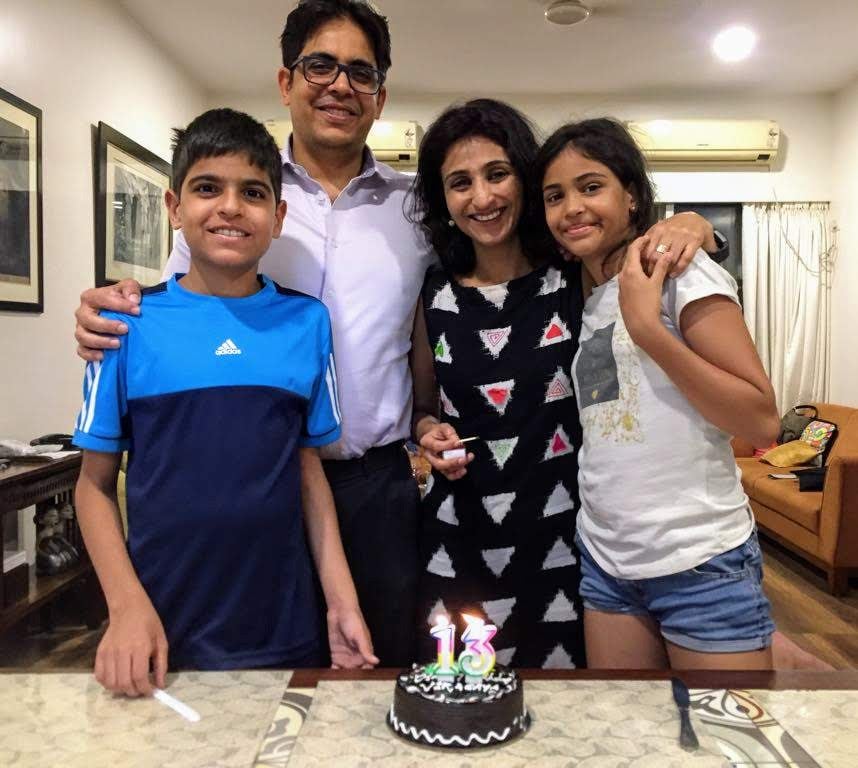 On family dinners: We primarily eat roti (bread), rice, dal/curry, and vegetables, as well as chicken, mutton or fish. My comfort food is a simple bowl of dal and rice; it hits the spot at the end of a long day. Everyone is also used to a spicy palate. My spice tolerance is medium high, but I know people who bite into chilis! They go to restaurants known for very, very spicy food, and they’re wiping their sweaty foreheads the whole time. 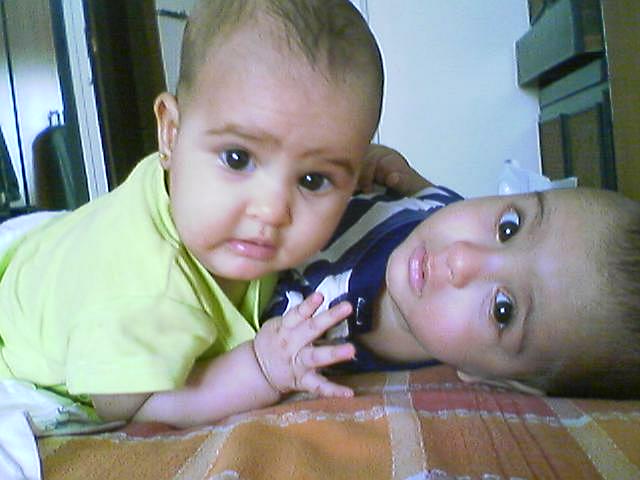 On pregnancy and birth: Since India has one of the largest populations in the world, pregnancy and birth is happening all the time here. Around the seventh month of pregnancy, families plan a ‘godh-bharai.’ Female relatives come over to sing, dance and bless the mother-to-be, filling her lap with fruit, money, gifts and sweets. For me, six days after my kids were born, my husband’s mother and grandmother also organized a large tea party. Bloated and sleep deprived, I put on makeup and jewelry and squeezed into clothes to hang out with extended family. My breasts were leaking madly! Fortunately, I escaped into my room claiming the twins needed to be fed and stayed there until all the guests left. 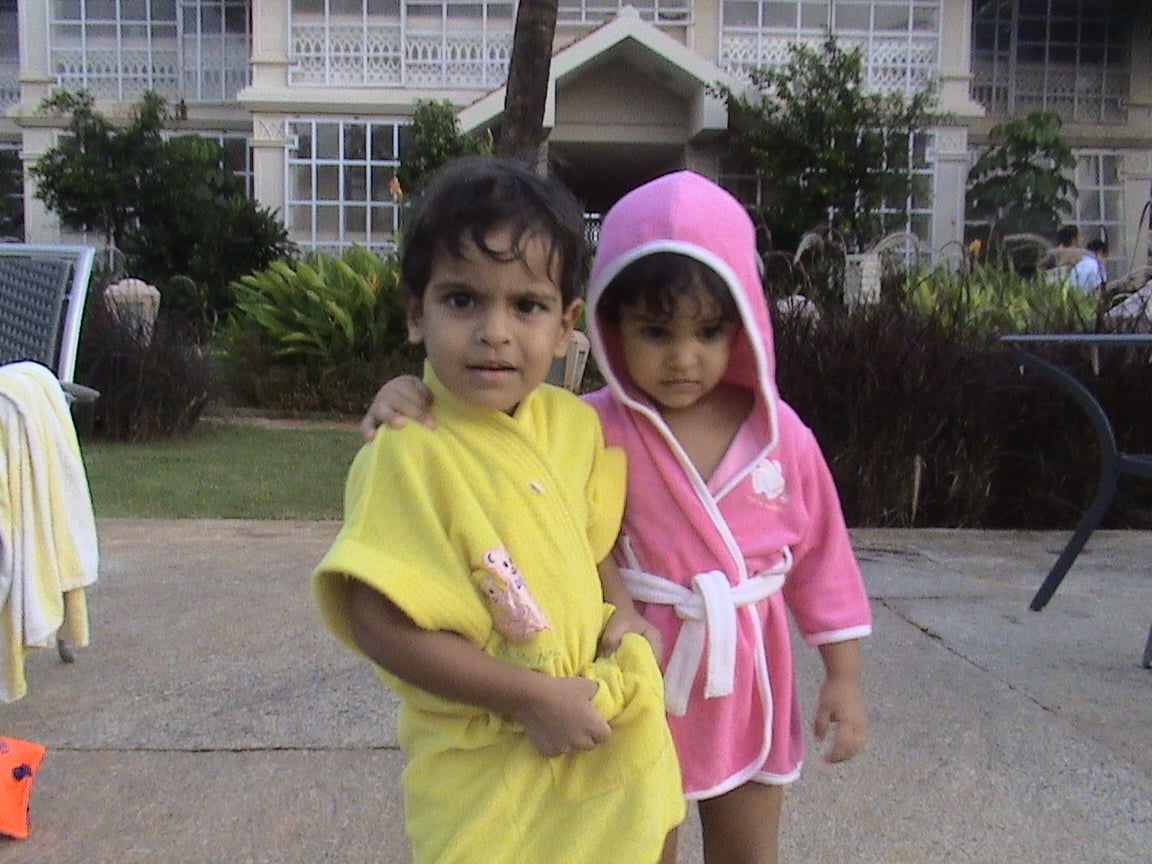 On raising a child with autism: When our twins were three, our son Vir was diagnosed with autism. I suddenly had so much to grapple with, like therapy and education, but also the deep-rooted social stigma of having a kid who was different from the norm. In India, there is a huge lack of awareness around developmental disabilities, so the mother is often blamed: ‘You didn’t eat well during pregnancy.’ ‘You’re not spending enough time with your child.’ ‘You don’t talk enough to your child.’ While my family and friends were supportive, it was difficult dealing with other people — coaches who told me Vir would not be ‘a good fit’ for their classes, moms who eyed Vir and me suspiciously, kids who made fun of him.

On navigating the school system: My experiences with schools have been diametrically opposite, since I have one neurotypical child and neurodivergent child. With my daughter, the journey was fairly smooth. With Vir, it’s been a different ballgame. Most Indian schools claim to be inclusive but are not in reality. It was extremely hard to get admission to a school if we revealed his diagnosis, so we decided to do some ‘jugaad’ and not say anything. We finally got into a school, but a month later were summoned to the principal’s office and reprimanded for not telling them about Vir’s challenges. Although at one point they told us we’d have to leave, the school finally came around and allowed Vir to stay along with a shadow teacher. 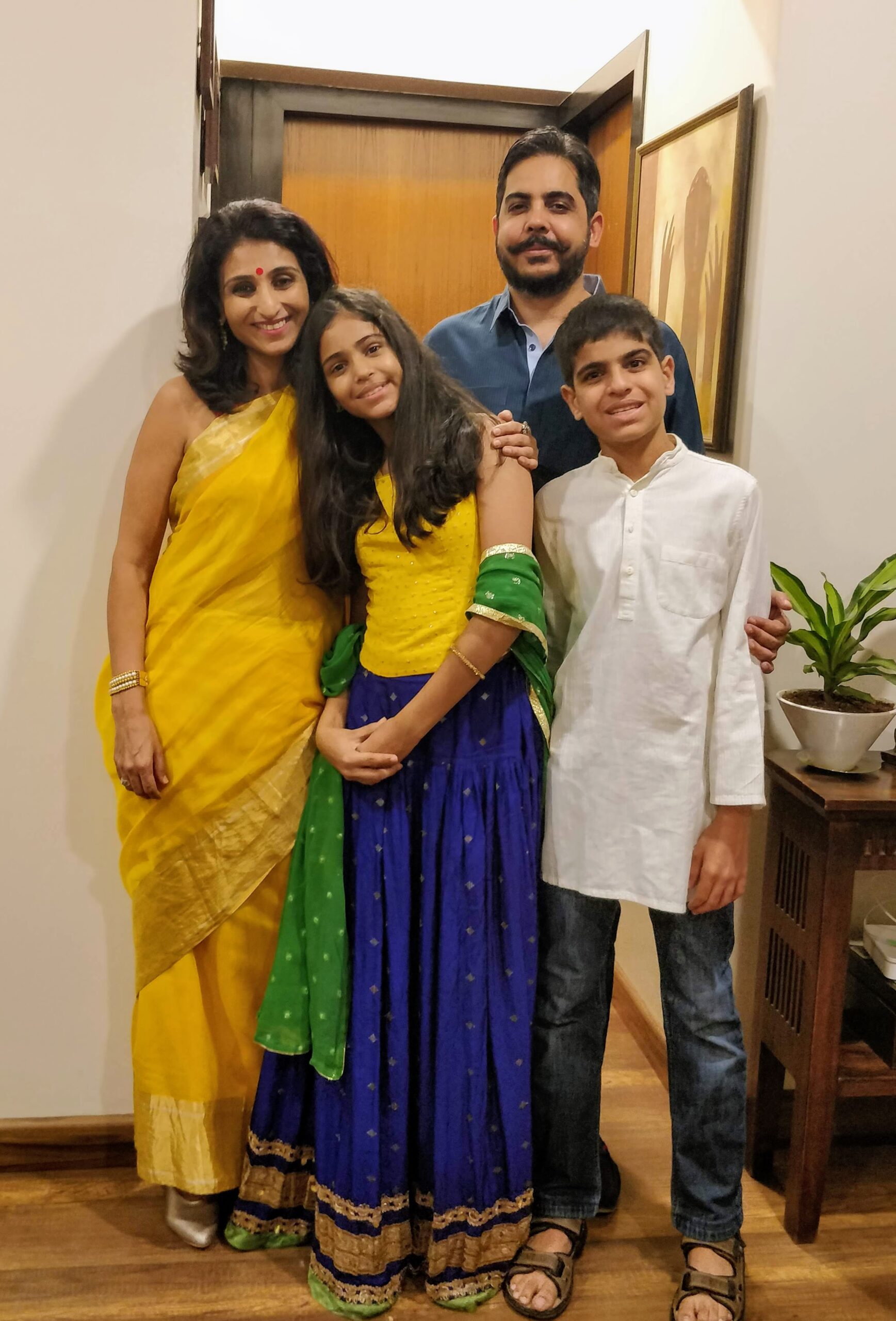 On keeping up the fight: Since then, Vir has attended two ‘special’ schools with smaller classes and less intensive curricula. Despite this, I find myself constantly having to fight for his rights, like getting him a writer for his exams (kids with disabilities in India can have a younger child physically write their exam; the older child dictates). If it’s a struggle for someone with the privileges I have, I can’t imagine how tough it is for people who don’t have the means or connections. That’s why I’ve made it my mission to advocate for people with autism. 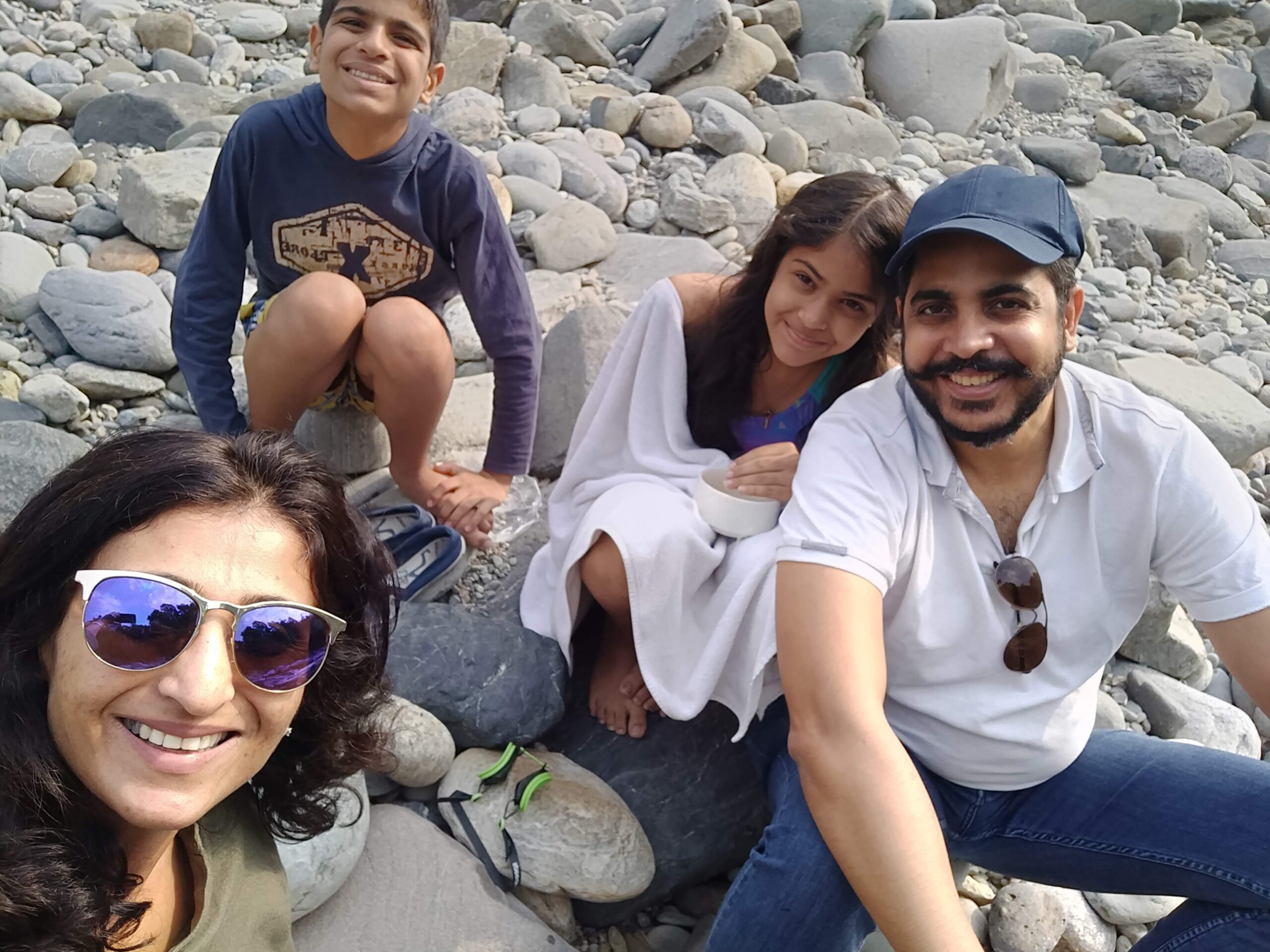 On gender expectations: Although it’s getting better, there is still differentiation between boys and girls — from families celebrating the birth of a boy over a girl (because he will carry on the family name) to activities kids are encouraged to participate in (needlework and art for girls, sports for boys) to careers kids are expected to pursue (STEM for boys; teaching and nursing for girls). I remember my daughter telling me that her teacher asked the girls to clean the boys’ cubbies — and my daughter refused to! 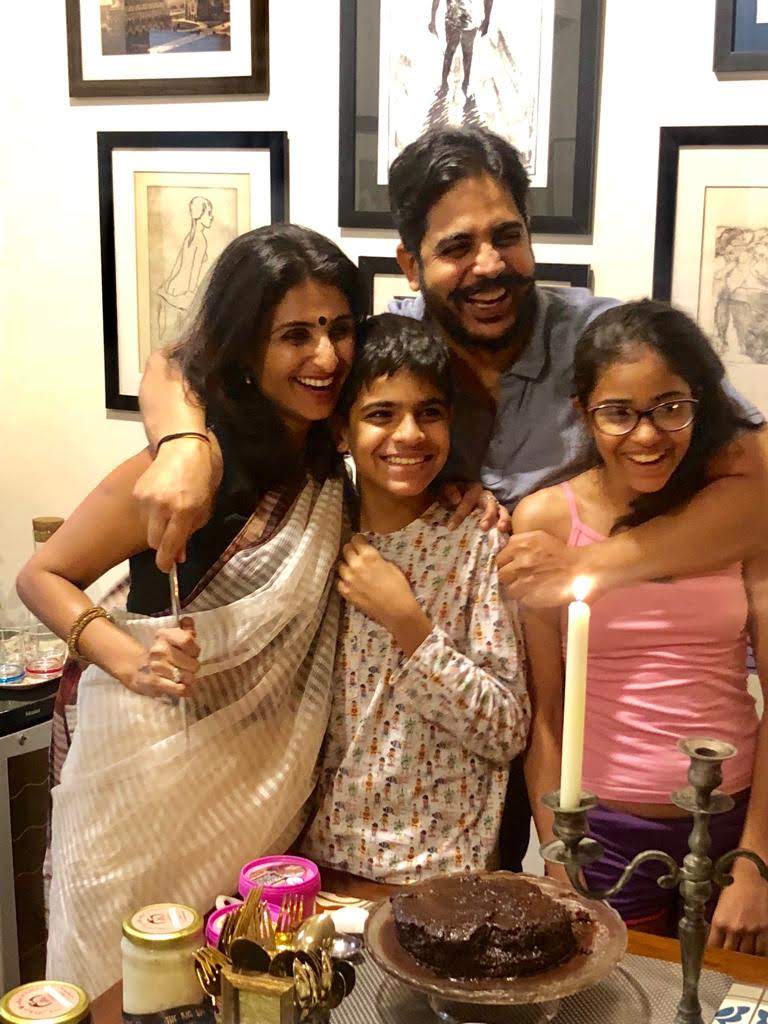 On connecting with in-laws: I call my husband’s parents ‘mom’ and ‘dad,’ instead of their first names. If you’re a woman, the saying is: you don’t marry a person, you marry a family. Since I married my husband’s family, his parents are now my parents. It’s also the wife’s duty to take care of her husband’s parents as they get older. (When it comes to your own parents, if you have a brother, your brother’s wife will look after them.) My husband’s parents are 70 and 71 and, touch wood, in the greatest of health. We live on our own right now, so the responsibility in the traditional Indian way isn’t yet happening for us. If they need more care, we will do it; we will be happy to.

On respecting grandparents: Grandparents have huge influence over grandkids. Traditionally, they’d make big decisions, like what foods the kid will eat and what schools the kid will attend; before the birth, the father’s mother might even choose the gynecologist for the mom-to-be. But these days, with us, grandparents are consulted, rather than laying down the law. I call my mom-in-law to ask, ‘I’m thinking of enrolling the kids in a dance class, what do you think?’ I have a great relationship with her, although sometimes it’s a tug of war because you want autonomy over your children, but at the same time you revere your in-laws. Most people learn to pick their battles; that’s the key. 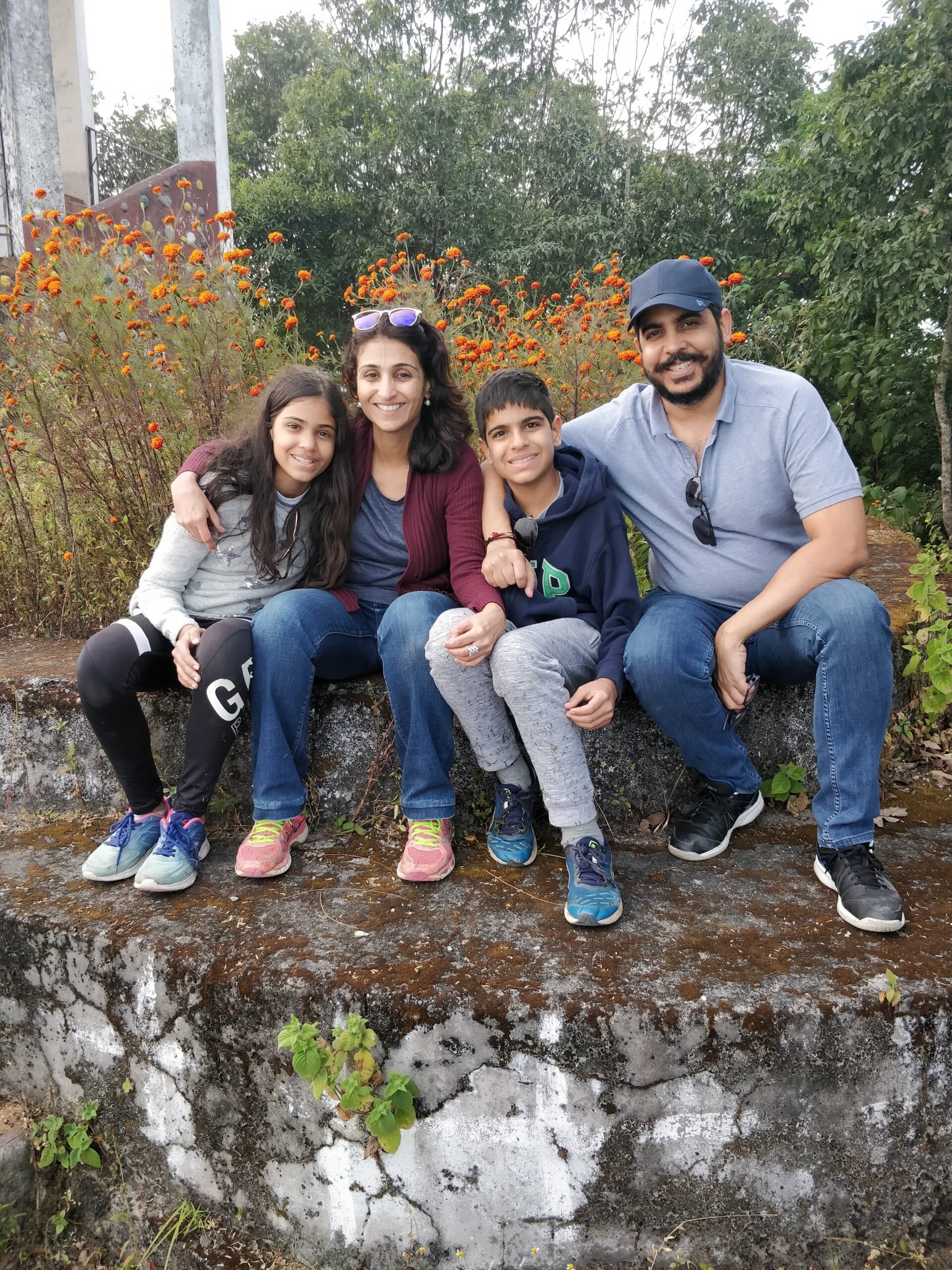 On hopes for the future: My dream is for all kids to be allowed to participate. I know that not everybody can be the winner and get the medals, and I don’t even want that. I just want kids with disabilities to be given a chance. For example, my kids went to camp for nine days in the hills. I was nervous but I said, ‘Okay, I’ll surrender.’ I had no phone access; I could only scroll through the Facebook photos to see if my children looked happy. But the kids came back, and I could see this veneer of confidence on my son. He had survived the nine days. He had shared a tent with three other boys. I wrote to the founder: ‘All the parents who have kids who are different, all we want is for them to be able to participate. You’ve given him that, and you don’t know the difference you made in his life.’ What tends to happen is that these kids get pushed to the side, but I want them to be on the playground, at the birthday party, in the school, and then they’ll be able to grow up and be given a chance in the workplace, socially, etc. It makes such a difference as a society, even a global community. We just need to be kinder. I hope it all changes in a big way one day, but until then baby steps.

P.S. Our Parenthood Around the World series, including Turkey and Wales.